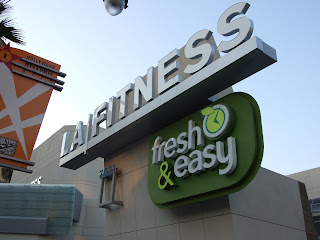 Rumors have been going around that Fresh & Easy stores may be headed for the end of the line and now there's a not-quite-announcement that the end may, in fact, be nigh.

I've been a fan of Fresh & Easy since they arrived in the U.S.  They're a great alternative to chain grocery stores (which around here are pretty much down to Ralphs, Vons and Albertsons) and an even less pricey version of Trader Joe's.

When I lived in Hollywood I spent months looking forward to that location opening, so much so that I giddily snapped this picture when the signage went up.  It was slow going initially for the Hollywood store, which had to open without a liquor license thanks to interference from the CVS next door.  They did eventually get the license and over the years the chain has made a number of adjustments and improvement to enhance the shopping experience.  Fresh & Easy has some really great products and really great prices, and I'll miss them big time if they do close it down, not to mention that would leave a whole lot of empty storefronts.
Posted by Melinda at 10:55 AM Labels: Foodie Stuff, Shopping