The title of this post is taken from one of my all-time favorite films, Al Pacino's awesome 1996 documentary Looking for Richard.  The film dealt mainly with how actors approach Shakespeare by interspersing rehearsals of a Pacino-led cast performing Richard III with interviews featuring British and American actors.  Another major aspect of the movie is the struggle to make Shakespeare's work, especially his historic plays, relevant to a modern American audience, most of whom have not been educated to understand and appreciate the Bard or British history that doesn't involve us declaring our independence from them.

In doing so the film gives a lot of background about what had preceded the action in the play (The Wars of the Roses, during which Richard's family, the House of York, took the British throne from the House of Lancaster), the intricate and frequently vicious relationships between the members of the royal family and their court, and how Richard schemed to dispose of his brothers (King Edward and George, Duke of Clarence) and his two young nephews - all rightful heirs to the throne before him - so that he could become king.  It was fascinating and the film at least accomplished its goal of making the play easier to understand, even though there were huge chunks of it that weren't even addressed.

A few months ago what was believed to be Richard's long-lost grave was found under a car park in England, and the other day it was announced that a DNA match had positively identified the remains as those of Richard III.

And of course, this being 2013 and all, this popped up within hours of the news that the former king had been found: 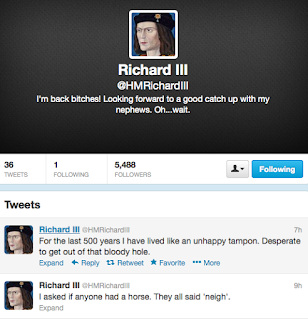 For more info: The Richard III Society.
Posted by Melinda at 10:26 AM
Labels: Cool Stuff, Film