But it's only a go if you already enrolled - WPA 2013 has sold out, less than 10 days after registration opened.  This year I signed up for the Driving Simulator and hopefully I'll have more success with that than I did last year with FATS (Firearms Training Simulator).  I was a lousy shot.

The photo for WPA's 2013 Golden Donut Short Story Contest was released a few days ago and this one is going to be tougher for me than the last couple years.  Previous photos featured old, deserted houses and I was able to work with those because I love old houses and idea of the secrets they hold and the stories they could tell.  I find this one to be more cold and industrial, kind of stand-offish, selfishly keeping its stories to itself: 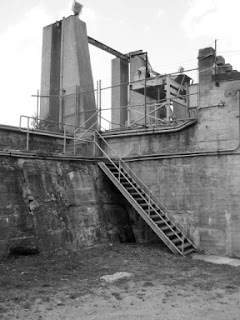 This picture is not speaking to me in more ways than one.

I was a Top Ten finalist in the last two Golden Donuts.  This one is going to be much more of a challenge.
Posted by Melinda at 2:32 PM
Labels: Writers' Police Academy, Writing, Writing Competitions