I swear if they have one of these in Southern Cal, I'm going 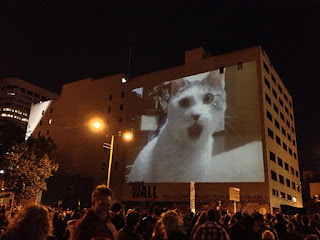 ...Teddy was among several cats who accompanied their owners to what could be easily described as a feline lovefest. On Saturday afternoon, thousands of people turned out for a block party featuring local bands dressed up as cats, comedians telling cat jokes and even a troupe of cat-themed dancers...

...But the real attraction came just after sundown, when a 70-minute reel of the most popular cat videos on the Internet was beamed onto the side of a 10-story building here in the city’s historic downtown district. The clips, compiled by Minneapolis’s Walker Art Center for its inaugural cat video film festival last summer, featured everything from cats behaving badly to a feline cast as a depressed French existentialist...


BTW, I have to say that I think the article's author was a little lazy, at least as far as identifying these famous cats.  The depressed French existentialist is the world famous Henri, le Chat Noir, while the cat in the accompanying picture is obviously OMG Cat.  On the other hand, it's Yahoo "News", so I guess should know to lower my expectations by now.

We seriously need a Cat Video Fest in L.A.  I'm leaving Sophie home, though.  Her continued failure to become an internet sensation means no extracurricular activities for her.  Not that I think she cares. 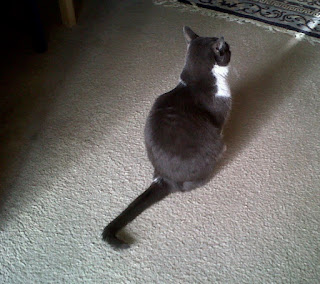 Posted by Melinda at 1:10 AM
Labels: Cool Stuff, LOL, Sophie