So Monday night around 10:45-ish unsuspecting Californians were jolted by a creepy sound coming out of their smartphones.  Mine was made extra creepy by the fact that I have my phone set up to vibrate as well as ring.  It was the kind of thing where you expect to answer and the person on the other end screams at you to get out now, that the calls are coming from inside your house.  You know, like it's about you.

The sad truth is what was really happening was that smartphones across the state were broadcasting an Amber Alert.  Two children down in the San Diego area had been abducted by a man who is suspected of murdering their mother before taking them.  Their lives may be in danger and even if they are recovered alive, they've suffered a heinous loss, not to mention the whole experience will probably scar them for life.

Apparently a large percentage of the population that received the alert - and some received multiple alerts (I only got the one) - was so traumatized by it that they seem to be more concerned with their "experience" rather than what has happened and is happening to those missing kids.  Not only have many of them taken to the internet with their "story", but a lot of them have decided to turn off the Emergency Alert app on their phones.  Because getting the alert was disturbing, and for some of those who got multiple alerts, it became annoying.  Seriously.  An Amber Alert is issued and a significant number of recipients respond by disabling the feature. 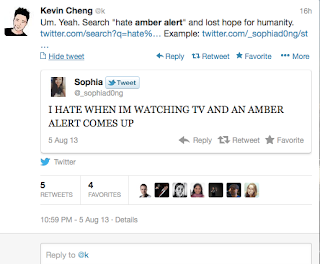 You're upset?  How about those poor kids and their dead mom?  I bet they would have loved to have been no closer to this than a disruptive ring tone or three.  I'm embarrassed on behalf of my state, something that sadly has been happening on a regular basis for a number of years now.

LOL?  Are you fucking kidding me?  WTF?

Imagine the next time an alert is issued and someone who turned off their app is sitting right next to the child or kidnapper, or possibly might be at a traffic signal right next to them in a car they might notice if they'd received the alert.  Turning off the alerts may someday result in a child who could have been saved ending up dead, their body stuffed away somewhere in the hopes that it will never be found, while their family waits for God knows how long to learn their fate.   If I was on the writing staff of a crime drama, I'd be typing up that synopsis right now.  "Missing Amber".  Coming to a crime drama near you.

And call me crazy, but I think the whole point of an emergency alert is to get everyone's attention immediately.  Mission accomplished, but some people just have fucked up priorities, I guess.

Luckily, a lot of people are using social media to get the alert out to as many people as possible.  But still, what is your mindset when you hear a story like this and a sizable portion of the reaction is that people just don't appreciate the intrusion?

I concur.
Posted by Melinda at 3:28 PM
Labels: California, Crime, I could use this in a script, Jerks, Media, Television, Writing