The Brother and I hit Staples Center last night for the fifth game of our ten-pack.  We were treated to another exciting game as the Kings held on to beat the St. Louis Blues, giving us a record of 4-1 so far this season in games attended.  The past couple of years our beloved boys in black have lost most of the games we've attended, so it's nice not to feel like we're bad luck.  The Kings took a 3-0 lead into the third with two goals from rookie Tyler Toffoli and one from Jarret Stoll.  The Blues scored in the third period, then got another one past Ben Scrivens with about fifteen seconds left after pulling their goalie, however they were unable to tie it up and L.A. took the two points in a game that was nowhere near as close as the score.  We were kind of surprised Sutter didn't put Toffoli out when the Blues net was empty to try and get him a hat trick, but the important thing is that we won, and Toffoli got top star of the game.

Interesting factoid: Hockey players like to give each other nicknames, which are usually just a pretty unimaginative play on their actual names (Brownie, Kopi, Quickie, Cliffy, Cartsy, Kinger, Marty, Mitchie, etc) but Toffoli's teammates in Manchester (the Kings minor league team) bestowed a rather unique one on him: Top Titty.  Heh.  Boys will be boys.

On the opposite end of the fun spectrum there were the three guys sitting behind us who talked nearly non-stop throughout the entire game.  It was kind of weird because they did seem to be into the game, but they would not shut up.  I was tempted to turn around and tell them they were missing a good game.  It seemed more civil than SHUT THE FUCK UP.  I could feel a headache coming on in the third period, but the Kings win tempered that.  Some samples of the obnoxiousness:
It would have been one thing if the game had been boring, but it was a great game.  Imagine how annoying those guys must be in the office.

In other news, L.A. Live lit up their Christmas tree last night and it is beautiful (and huge): 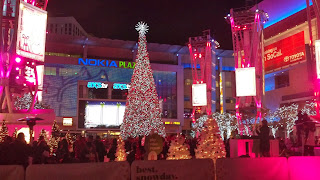 Very sparkly.  I'd like to have the money spent just on electricity for L.A. Live for just one night.  Season tickets for life.

Our seats this season are right next to the tunnel, however the Droid has proven to be less than adept at catching shots of players striding out onto the ice.  This is pretty much the only one that wasn't a total loss: 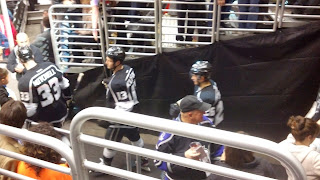 One of these days I need to dig out my camera and see if I can get some decent shots of the players with that.  In the past I've tried getting shots of them skating and they just move so fast most of the time they're a blur, so I'm not sure if tunnel shots will be any better.  Usually I can get some pretty decent shots with the phone (the picture that I have as my header, for example) but it's just not up to action shots.

All in all, a fun and exciting night at the Stape!
Posted by Melinda at 8:32 PM
Labels: Downtown L.A., Hockey, Holidays, Los Angeles, Los Angeles Kings, Photography