Amazon gets into the screenplay app business, with a huge bonus

Not sure how I hadn't heard about this earlier, but in November Amazon launched Storywriter, a screenwriting program that can be used both online and off. I just downloaded it and haven't really had a chance to try it out, but apparently it's pretty simplistic and easy to use.

But there's more. Apparently Amazon Studio is using Storywriter to scout new talent for its original content. You don't need an agent, contacts or an uncle in the industry. You submit direct to Amazon Studios from Storywriter, simply by clicking on the submit option. It's that easy, apparently. 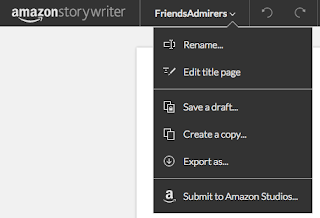 It also imports already written scripts from a variety of formats. I imported one from Final Draft and it was quick and flawless. I'm impressed so far and am looking forward to playing around with this thing and even submitting a script.