Day 2 and the rain stayed away! It was typical, beautiful Southern California weather.

Quartey sets his stories in his native Ghana. He left to study medicine in the United States. Hirahara is of Japanese descent who sets her stories in Los Angeles. Black became fascinated with Paris in the 1990's and finally channeled her obsession into novels. In an odd twist, they all live within miles of each other, in Pasadena and Altadena.

Quartey was inspired to write Ghana-based crime fiction after seeing a documentary about crime in that country, which included a detective who used the threat of witchcraft and curses while interrogating a suspect. When he returned to Ghana after years away, he was stunned by how much it had been built up. The combination of this modernity and the traditional beliefs shown in the documentary inspired him to set his stories there.

Hirahara mentioned that she accumulated a lot of rejections before being published, but said she was never disillusioned. She also had a couple funny comments about the danger of writing real life places. In one of her stories she mentioned a local restaurant, Empress Pavilion, by name, only to later discover that it had closed down. Just to add insult to injury, it later reopened. And then there was the time one of her characters mentioned that football team that used  to be in Los Angeles...

Black discussed the differences in technology between today and the 1990's in which her novels take place. Once, at a talk, a very young woman made the comment that she writes "historical novels". That one got a big laugh. Hirahara pointed out that the main character of one of her series is not up on tech and in fact still uses a Thomas Guide to get around town.

Black frequently travels to Paris and told a crazy story about going to a shooting range there. That wasn't the crazy part. Apparently she was wearing rubber flip-flops and hadn't noticed that some of the shell casings got stuck in the soles. She didn't notice it until she was back in the U.S. unpacking from her trip. The shell casings had made it through TSA with no problem.

After the panel had ended, while everyone was gathering up their things and heading out, I overheard a couple of people in the audience mention what a great moderator Corwin was, that he asked his questions, then got out of the way so the authors could talk. I couldn't agree more, he did a great job.


Michael Connelly in Conversation with Titus Welliver
There must have been tumbleweeds blowing through the FOB after a huge chunk of attendees packed the Bovard Auditorium to get their Connelly/Welliver/Bosch fix.

Michael Connelly, the author of the Harry Bosch series, chatted up his leading man much to the delight of the FOB crowd. It only lasted an hour, but I'm pretty sure they could have gone on all day long and no one would have complained.

A huge part of the discussion focused on Harry Bosch himself. Welliver commented on Harry's "perfect moral compass" and described him as not a guy with an inherent need to be liked. He likened him to an old soldier, someone who will be "soldiering on until the dirt nap". Welliver described getting the role as "the greatest gift of my career". He has been getting caught up on the Bosch novels and said that the more he reads, the closer he feels to Harry. In what I thought was a nifty comparison, he described the complex Bosch as an advent calendar. In additional good news, Welliver is also now the voice of the Bosch audiobooks.

Welliver said that some of his favorite scenes have been Bosch with his daughter, because Harry doesn't know what to do. Connelly responded to that with, "It gets worse next season." Speaking of Season 3, Connelly offered that the writing started a month earlier than previous seasons.

Another comment I thought was neat was Connelly explaining where the character of Harry Bosch had come from. He said Bosch came from a lot of different places, but specified that after reading Raymond Chandler, he wanted his own Marlowe. Damn if he didn't do just that.

During the Q&A, Connelly was asked about the creative control he has on the show. His response was that he doesn't, but that people working on the show don't want to disappoint him, and through him the fanbase as well. Amazon - to their great credit - insisted that he be involved if they were to finally bring Harry Bosch to the screen. As a condition to his involvement, Connelly insisted that the show be shot entirely in Los Angeles (except of course for the scenes that take place outside of L.A.).

There was a great moment when an audience member asked Connelly about his next Bosch novel, which comes out in November. In the novels, Vietnam veteran Harry has aged in real time since his debut in The Black Echo in 1992 (in the show, Bosch is a Gulf War veteran to adjust his age). As a result of this - and the LAPD's mandatory retirement age - he's aging out of the force, and the question was specifically how Connelly was going to handle that. He responded that Bosch would be carrying a badge, it just wouldn't be an LAPD badge. This prompted Welliver to crack, "He's doing security at Ralphs."

The funniest thing in the whole entertaining hour - which I alluded to in a previous post - was when they were discussing Harry, and Connelly turned to Welliver and his Boston Red Sox t-shirt and calmly asked, "You know he's a Dodgers fan, right?" 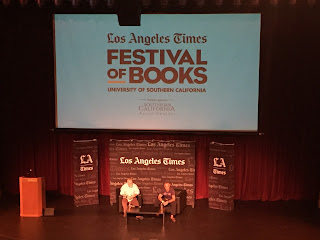 The panel discussed the importance of being a part of the writing community, online and off, in order to publish and promote your work. Kreizman: You're having a conversation, not just shouting into a void. The popularity of her website Slaughterhouse 90210 led to a book deal. Fitzgerald pointed out that the internet means writers no longer have to be in L.A. or New York to be part of a community.

Kreizman discussed the self-publishing boom, which she touted as great, but also pointed out that self-published writers have to really hustle and do a lot of work (editing, PR, etc.) that require a lot of different skill sets, services that a traditional publisher would provide for them.

On the topic of ever changing technology, Fitzgerald had a neat analogy. He talked about back in the day when monks hand-wrote and illustrated books, only to have the printing press invented. Monks: "Those aren't real books." It was funny, but also drove home the point that you can't fight progress. Whatever you think of publishing in this day and age, the changes are here to stay and will probably continue to evolve. Deal with it.

In the Q&A, the panel was asked about submitting and negotiating without an agent. They cited several resources including The Author's Guild, Poets & Writers and Submittable among the many online sources available. They were also asked what they think is coming in the future. Raab cited Storyhive, while Fitzgerald mentioned geotagged stories and apps. Everyone involved agreed that no matter how clever a concept is, it still requires good writing.

Fun fact: This panel was broadcast live on CSPAN's BookTV. I got to see it later when it was re-aired and had to laugh at the offensive language warning they put onscreen when Fitzgerald dropped several F-bombs. Also, you can see me in the broadcast, so I've officially been on TV. And I looked like crap.

Except for a couple more purchases, that was the end of my awesome Festival of Books weekend. Can't wait for next year!

Here are a few more pics snapped over the weekend: 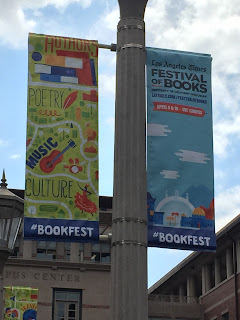 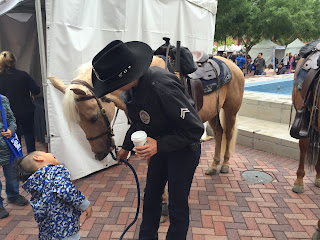 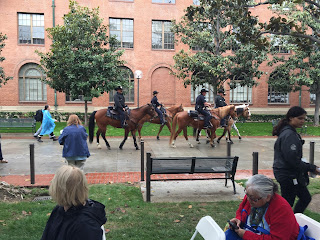 Posted by Melinda at 10:47 AM
Labels: Books, Los Angeles, Television