Screening: To Kill a Mockingbird at the Million Dollar Theater

As part of this year's Last Remaining Seats program, The Los Angeles Conservancy presented the classic To Kill a Mockingbird at the historic Million Dollar Theater last Wednesday. 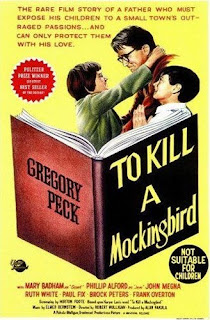 Jean Louise Finch (Badham) - a young tomboy better known by her nickname of Scout - looks back on a formative period of her childhood in the Depression-era South in this film adaptation of Harper Lee's Pulitzer Prize-winning novel.

Scout and her older brother Jem (Alford) live with their widowed father, lawyer Atticus Finch (Peck) in a small Alabama town. Scout experiences a number of normal childhood bumps in the road - first day of school, conflicts with other kids - until Atticus is asked to defend Tom Robinson (Peters), a black man accused of beating and raping Mayella Ewell (Wilcox), a local white girl. As the case progresses, Atticus is increasingly unable to shield his children from the cold realities of prejudice and poverty.

The film is pretty much flawless, but it's in the court scenes where it really shines. Director Mulligan takes his time presenting testimony from both Robinson and his accusers. Atticus's summation alone runs almost ten minutes. But predictably, the all white, all male jury (hardly a jury of Tom Robinson's peers) convicts him despite the overwhelming evidence produced by Atticus that Mayella's abuse most likely came from her alcoholic father (Anderson).

Another source of interest in Scout and Jem's otherwise idyllic world are their reclusive neighbors, the Radley's. They develop a bit of an obsession with Boo Radley (Duvall), the family's adult son who is kept locked up in the house due to having once attacked his mother with scissors. They will finally meet Boo (who the unfailingly decent Atticus introduces as Mr. Arthur Radley) when he comes to their aid when they're menaced by an angry and intoxicated Bob Ewell, still stinging from being made to look bad by Atticus during the trial.

Some To Kill a Mockingbird  facts and trivia: