This is freaking phenomenal - The 9/11 Seinfeld spec script

Don't let the idea of it put you off - you have to read this. It's amazing. It is genius. It's the imagined post-9/11 Seinfeld episode.

From the article linked above:

Here's a great way to make a name for yourself as a comedy writer: write a pitch-perfect spec script for the classic sitcom Seinfeld...set in the days after 9/11. Yes, Seinfeld may have gone off the air in 1998, but comedian Billy Domineau imagined a world in which the show kept airing and Jerry, George, Elaine and Kramer acted like the entitled, selfish, near-sociopathic New Yorkers that they always were during one of the most trying and intense times in the city's history. 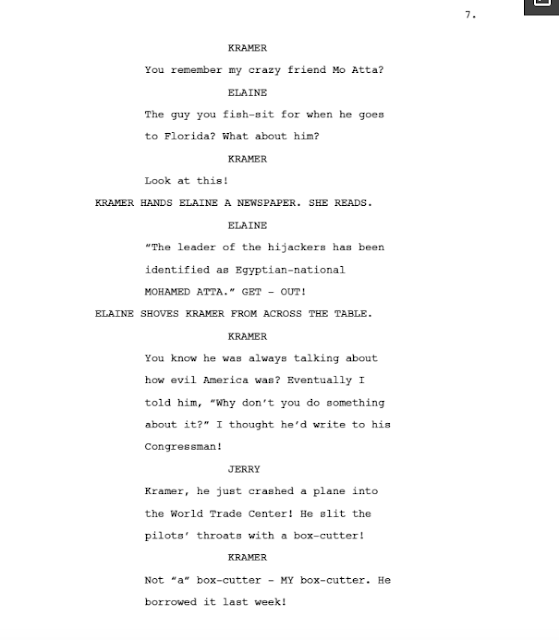 The writer, Billy Domineau, is a freelance joke-writer who decided to do the script as an exercise in bad taste for a sketch-writing student he was working with. He started writing it in mid-July, and within days of it hitting the internet he had acquired representation.

Do take the time to read it. It's brilliant. I don't think Domineau missed a trick.