The past few months I've gotten in the bad habit of starting books but not finishing them. It's like my writing - a ton of works in progress, but nothing finished. I've tried recently to wrap up some of my reading works in progress, and here they are.

Close to Shore: The Terrifying Shark Attacks of 1916 by Michael Capuzzo

A meticulously researched and historically detailed trip to the summer of 1916, when a great white shark terrorized swimmers along the New Jersey shore.

So detailed is the tale that while the first victim is introduced on page 1, the actual first attack doesn't finally happen until page 95. Capuzzo takes his sweet time getting to the first strike, giving us a lovingly detailed look at life in that part of America in 1916, when the country was somewhat reluctantly coming out of the Victorian era but hadn't yet reached the roaring twenties. He's done his research on both this era and on sharks themselves.

These attacks inspired Peter Benchley to write his best-selling novel Jaws, which would go on to become an even more successful film. Shark expert Matt Hooper, played by Richard Dreyfus, references these attacks in the movie.

The great jaws rose from the water, a white protective membrane rolled over the eyes, fifty triangular teeth closed with more than six tons of pressure per square inch, and man and fish splashed in a spreading pool of blood. One bite. One massive, incapacitating bite tearing into the left leg below the knee. Charles screamed in mortal agony, a scream that resonated to the beach and tennis courts and veranda. The attack had taken less than a second, but now time began to slow down. His parents and sisters and the crowd of onlookers stood transfixed in horror and disbelief.

Due to a combination of my newfound obsession with New Orleans and one of the movie channels recently airing Streetcar, which has always been a favorite, I ended up buying The Collected Plays of Tennessee Williams, a hefty two-volume set that covers the prolific playwright's work from 1937 through 1980.

The story of the brittle and fallen Blanche DuBois's ill-fated visit to her sister Stella and brutish brother-in-law Stanley Kowalski in New Orleans is well known. It was interesting to see what was left out of the film version (mainly pieces of dialogue), how it was staged, and especially how the ending was changed for the film to placate the Hays Code that was in place in Hollywood at the time. It was even fascinating to see how different lines of dialogue were written in the play versus how they were delivered in the film, specifically Karl Malden's comical film-version insistence that, "Poker should not be played in a house with women!" In the play's text, it's supposed to be said "sadly but firmly". Not sure if Malden said it sadly but firmly onstage as Williams wrote it, but he certainly didn't on film.

What else? STANLEY (with heaven-splitting violence): STELL-LAHHHHH!


You Will Know Me by Megan Abbott

Megan Abbott is hands down one of the best writers alive right now. That being said, while You Will Know Me has been receiving accolades and although I liked it enough, it didn't stay with me the way two of her earlier works, The Song is You and Queenpin, did.

Katie and Eric Knox's life pretty much revolves around their teenaged daughter Devon, a budding world-class gymnast. Their lives are thrown into chaos when Ryan Beck, a young man who is dating an assistant coach at Devon's gym, is killed by a hit-and-run driver. With a qualifying meet that will put Devon en route to the Olympics looming, the investigation into Ryan's death gets closer and closer to the Knoxes. Katie's response is to do everything necessary to protect her family and especially her icy, iron-willed daughter.

Abbott does a great job of bringing us into the hyper-competitive world of girl gymnasts and their families. Some of it is fascinating, like the financial sacrifices and wanting everything for their children. Some of it is just sad, like the fear of the onset of puberty ruining the girls chances at greatness.

Was one meant to pay forever for a fleeting mistake? A turn of the wheel, a bobble of a foot, a pause that lasted seconds too long?

I grabbed this while at Barnes & Noble because it looked interesting and I wasn't disappointed. I also discovered this is part of a "Chronicles" series, so now the Los Angeles version is on my Amazon wish list.

Las Vegas is a city like no other and its history reflects that. Roman goes all the way back to the area's original residents, the Paiute Indian Tribe, who were able to survive in the desert due to the fact that Vegas actually sits on a spring well. After a bumpy start with white settlers, Chief Tecopa, leader of the Paiutes, decided his people would be better off joining rather than fighting and the settlement of Las Vegas began. Brigham Young and the early Mormons would also play a surprising major role in the development of the future Sin City.

The book covers a number of eras in the city's colorful history, including the mob, prostitution, atomic testing in Nevada, Elvis, Liberace, the MIT card counting scandal, desegregation, Siegfried & Roy, the rise and fall of various hotels and casinos, and of course The Rat Pack. Like the town it covers, there's never a dull moment in this book.

The show was more than just famous singers crooning the great American songbook; it had an edge. It was the era when nobody brought kids to Sin City. These guys were swingers: bad boys who earned their moniker as the Rat Pack, laughing and boozing it up onstage while cheating on their wives and mingling with the Mob when they weren't filming a movie.

Disclaimer: Matt Coyle is the editor for my story in LAst Resort. Because Matt lives down in the San Diego area we edited via phone and email. I finally got to meet him in person at Bouchercon in New Orleans.

Night Tremors is Coyle's second Rick Cahill novel and was nominated for Best Novel at Bouchercon in September. It didn't win, but the first Cahill novel, Yesterday's Echo, scored Bouchercon's Anthony Award for Best First Novel in 2014. The third Cahill novel, Dark Fissures, will be released in December.

Cahill is a La Jolla (upscale San Diego suburb for you non-Southern Californians) former cop turned private investigator. He's had a rough past that involved his wife being murdered, with the added insult of him being the chief suspect, creating a very rocky relationship with his former fellow cops. Here he's asked to clear a young man who had been convicted years earlier of slaughtering his family as a teen. The young man's grandparents are convinced of his innocence and have the financial means to bankroll a new investigation. While Cahill initially signs on out of sympathy for the grandparents and a need to cover his mortgage, he becomes increasingly convinced that the same cops who think he murdered his wife helped frame the young man. 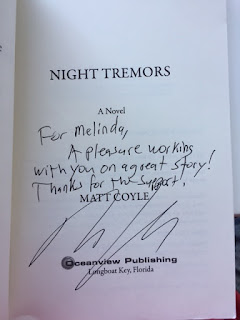 "Your case is a dog, Cahill." She folded her arms across her chest and her eyes went black. "Randall Eddington killed his family, and you're only adding to his grandparents' grief by giving them false hope. Are you proud of the way you make a living, Rick? By sucking money out of other people's sorrow?"

Another play! Jeffrey Sweet is an award-winning playwright and author, and when I came across him I decided to check out one of his plays.

Flyovers was a big hit when it debuted in Chicago in 1998, starring William Petersen, Marc Vann, Amy Morton and Linda Reiter. I'm thinking the performance probably ran about an hour. This was a quick, easy read with a terrific twist ending.

Oliver (Vann) is a successful New York-based film critic who co-stars on a Siskel & Ebert-type show and has returned to his native Ohio small town for his high school reunion. While there, he is invited home for drinks by Ted (Petersen), who bullied him back in the day when they were in school together. Ted has recently lost his job due to a local factory closing after it was bought by a big corporation and his combination of disdain and envy over Oliver's big-city success is palpable. They are joined by Iris (Morton), who Oliver crushed on in high school. Oliver thinks everyone is burying the hatchet, but he's actually being set up for blackmail pictures and the way he handles it is delightfully unexpected. Even crazier, according to the author's notes, this is based on a real life blackmail attempt that happened to a friend of Sweet's.

OLIVER: If I don't write the check-
TED: Old business. I send the pictures to-
OLIVER: -to my wife, yes. But what size were you thinking of sending?