The fine folks over at Curbed L.A. have put together an interactive map of proposed locations for L.A.'s bid for the 2024 Olympic Games. And it is all over the place. 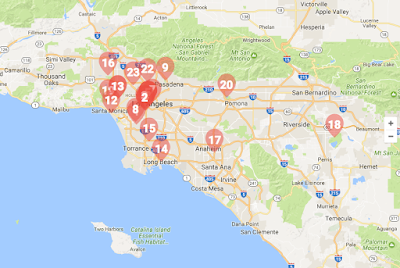 Each of those red dots represents a different location. The Coloseum, Staples Center, the Los Angeles Convention Center, Forum, Rose Bowl, Microsoft Theatre, Universal Studios, USC, UCLA, the new L.A. Rams/Chargers football stadium, and Riviera Country Club are among the venues that are actually in the Los Angeles area. Additional events would take place at the Long Beach Convention Center, Honda Center in Anaheim, and Bonelli Park in San Dimas, which is at the far east end of L.A. County (adorable little town, I lived there years ago). Another sports venue in Encino would also be used, but the winner for the most remote venue would be Lake Perris in Riverside County.

One thing I noticed is that the equestrian events would be in Encino. I think they were at Santa Anita when L.A. had the Olympics in 1984. Arcadia recently opened their Gold Line Station with a shuttle to and from Santa Anita, but it also looks like the Orange Line goes right by the Sepulveda Basin Sports Complex, so it looks like they've got public transportation covered. In fact, if we get the Olympics, Metro will have to really step up because they're gonna get slammed, especially to Downtown and Santa Monica. They're slammed now since the Expo Line to the beach opened. The company in Japan that makes their cars is cranking them out as fast as they can, but Metro is really behind in having the number of cars they need.

It will be interesting to see what happens with this bid. I'm wondering if they have backup locations in case some of the more long-distance venues prove to be a negative.