Temporarily out of stock

Some musings on the deaths of Carrie Fisher and Debbie Reynolds, now that we've had a whole week to adjust to the idea.

I wonder what Carrie Fisher would have thought if she'd been able to see how much her death would affect people.

There is a petition to make Princess Leia an official Disney princess. Apparently Disney has a rule in place that their princesses must be animated. Who knew? I'm thinking that Disney will make an announcement at some point waiving the rule for Leia, if for no other reason that it would buy them an incalculable amount of good will.

New Orleans paid tribute to Carrie/Princess Leia in their own unique way.

Fathom Events had scheduled theater screenings of Singin' in the Rain prior to the deaths. I tried to buy tickets for the one near me a few days ago and it was sold out.

I think the tribute that got to everyone was the one posted by Todd Fisher on Twitter after their mother had joined Carrie in death: 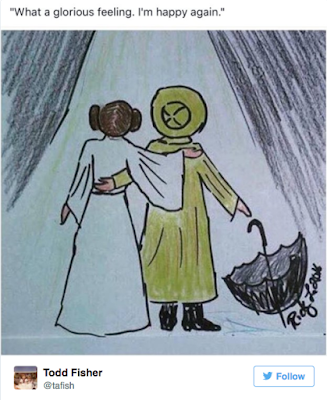 So far 2017 has spared us deaths of beloved celebs, although cops are unfortunately still fair game in the minds of thugs and lowlifes. But that's another post for another day.