So IMDb has followed through on their threat to shut down their discussion boards.

Since the announcement was made a few weeks ago, users have flocked to IMDb's social media accounts and made it crystal clear that they did not want to lose this feature. 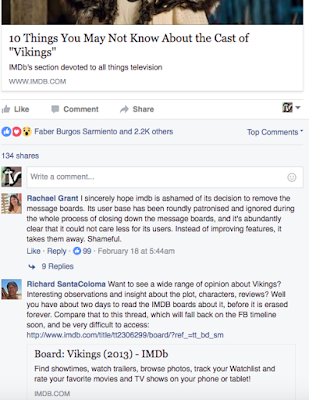 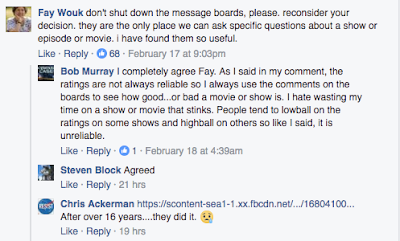 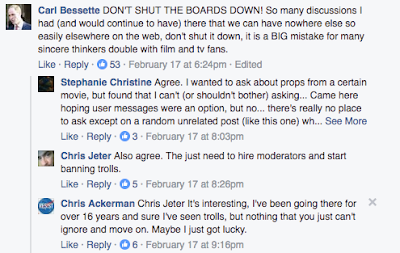 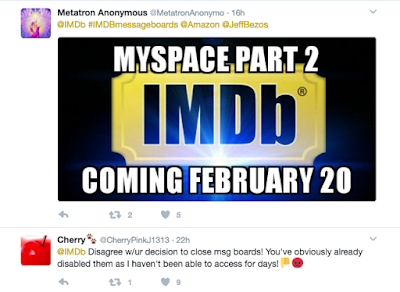 This last comment is what's so amazing about this corporate clusterfuck - absolutely zero response from IMDb to its users since the original announcement. Nothing. Users have bombarded IMDb's social media accounts with pleas, threats to delete accounts and apps, confirmation of deletion of accounts and apps...and nothing. Not a peep.

I have to think that this whole fiasco really diminishes IMDb in the eyes of the public. Not only did they broadside their users with the loss of a very active feature, but they then went radio silence in response to the outcry to save the boards.

I realize the boards had their fair share of trolls, but apparently it hadn't gotten bad enough for people to stop using them. And would it have killed IMDb to do a little moderating and banning trolls via their IP addresses?

One commenter pointed out that with the exception of being able to leave reviews (which apparently aren't interactive) the loss of the boards really just makes IMDb another version of Wikipedia. It doesn't even provide news that can't be found elsewhere on the net. But one thing is clear: IMDb dropped a popular feature, then didn't care enough and couldn't be bothered to respond to its many users who protested the decision. And that, my friend, is a ginormous customer service fail.

A few weeks ago, prior to the announcement, I would never have imagined IMDb as the next internet entity to begin a downward slide toward being the next My Space. Now it's at the top of the list. And it could easily have been avoided, or at least handled professionally. I know IMDb is owned by Amazon, but I think the question isn't so much who owns it, but who's running it. Because they just effed up massively.