Author signatures!!! Including mine!!!

My first panel of the day Saturday was Michael Connelly in conversation with Daniel Pyne. Pyne will be taking over as the showrunner for Bosch beginning Season 4 (Season 3 just debuted on Amazon Friday night). The previous showrunner, Eric Ohlmeyer, has moved over to The Man in the High Castle. Pyne also recently published a novel, Catalina Eddy, which sounds fantastic and is now on my Amazon wish list.

After the discussion I headed out to get in line for Mr. Connelly. I brought my brand-spanking new copy of LAst Resort for him to sign. The line wasn't as hellish as I'd feared - I probably only waited about twenty minutes to get to him. I explained that I was in the anthology and that it was the first time I'd been published. He's pretty low-key and not very chatty, but did take the time to write this: 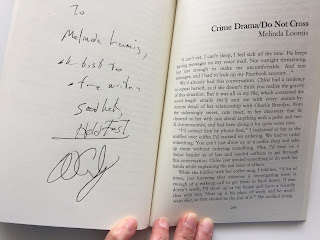 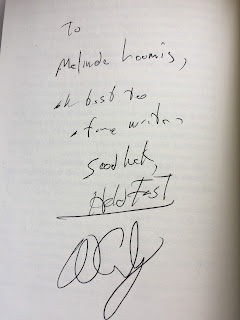 I'm proud to say that I didn't make a bumbling fool of myself in front of him. In fact, I don't think I even stuttered once. It was an awesome experience. 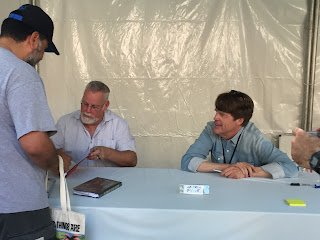 After that, I headed over to the Sisters in Crime Los Angeles booth to say hi and show off my newest treasure. Matt Coyle, my editor, had been signing earlier at the booth, but it was the same time I was seeing Michael Connelly so I thought I'd missed him. Luckily he was still around, so I got to chat with him. He also had me sign a copy of LAst Resort for him - my first book signing!

Sunday, as I mentioned before, I saw L.A. Times film critic Kenneth Turan at a panel called Hooray For Old Hollywood. After the panel I bought his book Not To Be Missed: Fifty-Four Favorites From a Lifetime of Film and had it signed, along with Hard-Boiled Hollywood: Crime and Punishment in Postwar Los Angeles by Jon Lewis. 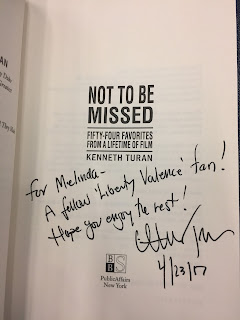 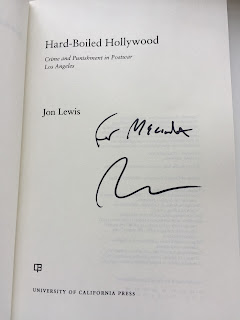