Okay, I'm back and other musings

Tonight marks two weeks since I arrived home from Writer's Police Academy (which I'm still planning on blogging) and it's been kind of a couple of wasted weeks. I got sick as soon as I got home - first a couple days of tension headaches (the flight home was rough) and then a really nasty cold that I'm still not completely recovered from. Throw in some car repair drama this week (the quote was a little over $3k, the biggest repair bill I've ever had) and I have just not been having a great time lately. I also haven't written much of anything and am now looking at a looming deadline. On the upside, I do my best work at deadline, so hopefully the story will come together in the next few days.

Anyhoo, the reason for all this whining is just to get caught up. I had this huge, ambitious to-do list for after WPA and I've barely even started to make a dent in it, but I'm feeling like I'm finally through the funk and can get moving.

Needless to say, my issues pale compared to what's happening in Texas right now thanks to Hurricane (now Tropical Storm) Harvey. It reminds me of watching the coverage of Hurricane Katrina, except a lot more organized. I do have to wonder why there was no evacuation order for Houston, but hindsight is 20/20 and it's not fair to pass these judgements at this point. Yet.

Some crazy visuals are coming out of Texas via social media:

The Salvation Army put this picture of one of their vans up on Facebook. Note the lightning strike in the background. 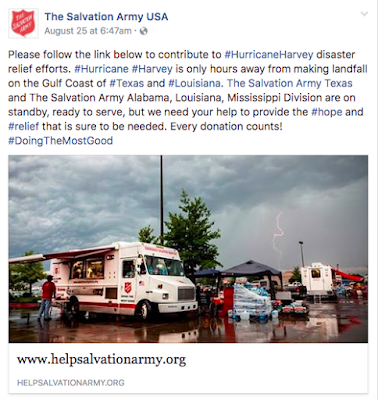 Talk about making the best of a bad situation - this guy literally caught a fish in his flooded home.

This is a highway in Texas, and there's still more rain to come. 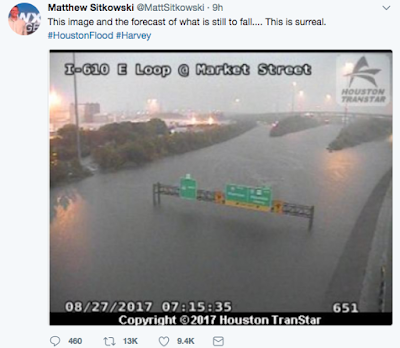 Boats have been deployed in the streets of Texas.

But this was the picture that really sent social media into overdrive. It was posted this morning on Twitter by the daughter of the woman who owns the nursing home, who had sent it to her asking for help. I heard on the news later that the residents were rescued. 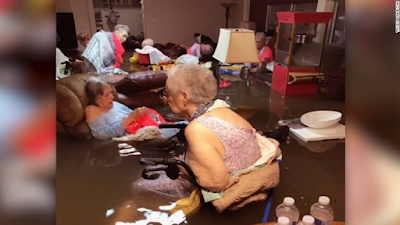 Posted by Melinda at 2:12 PM
Labels: I Customer, In the News, Personal Drama, Shopping, State of the Union, Writers' Police Academy, Writing