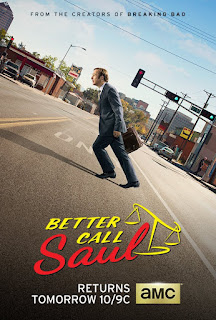 Ever since Better Call Saul - the prequel to Breaking Bad that follows Jimmy McGill on his journey to becoming Walter White's sleazy lawyer Saul Goodman - debuted a couple years ago, there have been a lot of theories flying around the internet among fans as to what exactly triggers the change in persona. In addition, we've also been shown him post-Breaking Bad as Gene the troubled Cinnabon Manager, leading to questions (and theories) about his journey from Albuquerque to that mall in Omaha.

One of the biggest questions in the minds of viewers is the eventual fate of Kim Wexler, Jimmy's sometimes girlfriend/sometimes legal partner who has become beloved by fans. The character of Kim was first introduced in Better Call Saul - she never appears and is never mentioned in Breaking Bad (or in the Omaha sequences) - so most theories posit that something awful or tragic happens and she either completely walks away from Jimmy/Saul, or she meets a horrific end that pushes Jimmy over the line firmly into Saul territory for once and for all.

I don't know how feasible it is, but here's a theory that would mostly spare Kim (much to the relief of fans) but might be a little too hopeful IMO: Does Kim Wexler end up as Saul Goodman's behind-the-scenes partner?

I hate to say it - while it's not a terrible idea - I think it's just a little far-fetched and driven more by viewers love for Kim and a desire for Jimmy/Saul not to have to lose her than by what fate probably awaits her. Plus I can't see Vince Gilligan and Peter Gould taking that easy of a way out. I don't know what they've got planned for Kim, but I can't help thinking she isn't going to get off that easily. Whatever they come up with, I'm sure it will be brilliant but probably not a happy ending.

I didn't watch Breaking Bad until after it had completed its run (my loss) and so didn't realize that this type of theorizing in this universe isn't new. It seems that some fans thought Walter White got off too easily because despite his death, he was able to see his family one last time and arrange for them to eventually get the money he had been so desperate to leave them. This fan on YouTube has the idea that Walter White's gunshot wound wouldn't have been fatal, meaning that he would have recovered to stand trial, go to prison (at least until the cancer killed him), been exposed to the world and deprived his family of the money. And he goes to great lengths to explain why. GREAT. LENGTHS.

Hate to admit it, he does make some valid points. Would love to know what Gilligan and Gould would have to say about it.