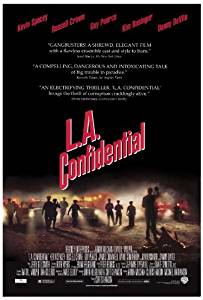 James Ellroy's L.A. Confidential has lived many lives. First as Ellroy's behemoth novel, a complicated, sordid tale of corruption in the City of Angels where the LAPD, the DA's office, Hollywood, the Mob, drugs, plastic surgery, a popular amusement park, and high-priced prostitution intersect. Among other things.

Despite their belief that the novel was unadaptable to film or TV, Ellroy and his agent sold the rights to Warner Bros. Warners first shopped it unsuccessfully as a potential miniseries before it became the Academy Award winning film by Curtis Hanson*. There is also an HBO pilot version featuring a pre-24 Keifer Sutherland as Jack Vincennes. The sumptuous episode appears on a special edition DVD of the film.

Recently CBS ordered an L.A. Confidential pilot. Besides the actual news itself, one of the more striking aspects is the casting of Walt Goggins as Trashcan Jack Vincennes, apparently with plans on keeping the character more loyal to the damaged original version in the novel than the slick Hollywood player portrayed by Kevin Spacey in the film, plus the intention of sticking closer to the original source material overall than the film did (as did the HBO pilot).

As a huge L.A. Confidential fan over the years (I own the novel, screenplay, film, soundtrack, and movie poster) I was intrigued by the idea of bringing it to broadcast television after all these years. If done right, it could really stand out from the usual CBS cop shows. No offense to those shows and the people involved with them - they've been wildly successful - but L.A. Confidential is a completely different cat and if CBS is able to nail Ellroy's sensibility about corruption in 1950's Los Angeles and Hollywood this could set a new standard for the normally staid network. I'm actually looking forward to it and for some reason feel really hopeful about it, rather than dreading it.


*I learned a lot about the optioning and eventually successful adaptation of L.A. Confidential while writing a report about it called "Adapting the Unadaptable" for a film class I took in the early 2000's. While my notes and the report are long gone, I do remember the details vividly. Despite initially believing his novel couldn't be adapted due to its length and breadth, Ellroy stated at the time that the film stood on its own as an excellent work related to but separate from his book and actively promoted it. Years, dozens of characters and multiple subplots had to be condensed or eliminated entirely to make it work as a film. It earned, in my opinion, one of the most well-deserved Adapted Screenplay Oscars.