I can remember not long ago when there was a rumor going around the internet that a specific brand/model of television could actually listen in and transmit audio from the owner's home back to the manufacturer (or whoever they authorized to listen in). People who believed this rumor were widely derided as paranoid nutjobs.

Now forward a couple years and many people have virtual assistants like Amazon's Alexa, Apple's Siri, Microsoft's Cortana, and Google Home in their homes and on their phones. All you have to do is launch your requests for anything from weather, traffic, directions, music, shopping requests and more into thin air, and your device springs to life to do your bidding.

I recently heard the following exchange - I wish I could remember exactly where, I think on the radio, but I'm not sure. It's also not word for word, but this is the gist of it:

Guy 1: You're just paranoid. Alexa isn't spying on you or listening all the time. She only listens when you call her by name to wake up and take your request.

Guy 2: If she's not listening all the time, how does she know when you call her name?

South Park (of course) famously nailed that very issue last season in the episode "White People Renovating Houses". In addition to hilariously spoofing home renovation shows, the episode also had a storyline in which Eric Cartman repeatedly gave orders to his Alexa, prompting viewer's devices to reset their alarms, add hairy balls to their shopping lists, and bid them good night, so effectively that some viewers had to unplug their devices to get them to stop responding to Cartman. Again, Alexa couldn't have not been listening for her name, right? RIGHT???

Which leads me to this, which I first spotted about a month ago, and which surfaced again today. It's a picture of Facebook braintrust Mark Zuckerberg at his desk. 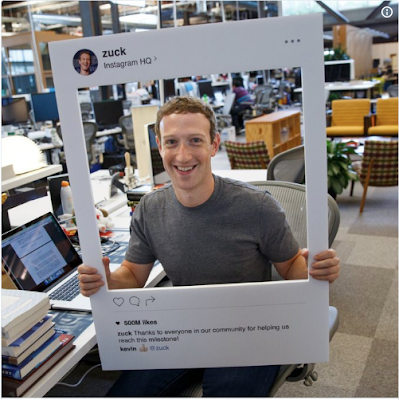 I don't know about Thunderbird - a brief online search didn't reveal it to be any more or less secure than any other email services - but the other items really caught my attention.

I've had my camera covered pretty much since I got my first Mac and the first thing that popped up on my screen - very unexpectedly - was my big old face from an unflattering angle. What I'd never thought about was the need to cover the audio jack as well. Both would probably have earned me the old paranoid nutjob label in the past.

On the other hand, if Zuckerberg of all people feels the need to cover the camera and mic jack on his laptop, that pretty much tells me everything I need to know about that. Not to mention how ironic it is that the man in the middle of ongoing user privacy issues makes a point of protecting his own privacy while exploiting ours. He may feel entitled to track the rest of us around the internet even when we're not on his site, but he doesn't want anyone to do the same to him. I call that hypocrisy, but I am grateful to Zuck for one thing: if it's good enough for him, it's good enough for me. The mic is now covered too.

Posted by Melinda at 11:07 AM
Labels: Facebook, Famous Idiots, I Customer, Television