"Quack" at the Kirk Douglas Theatre 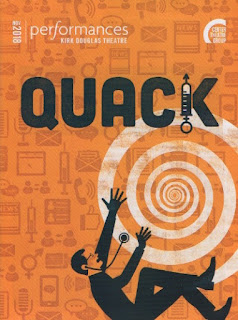 It's been a while since I went to a live theatre performance, and gotta admit, I missed it. Luckily, Sunday I headed to Culver City to see Eliza Clark's "Quack" at the Kirk Douglas Theatre, and I highly recommend it.

"Quack" is the story of a popular, long-time medical talk show host whose world falls apart after a fledgling writer publishes a massive hit piece on him.

Dan Bucatinsky seamlessly inhabits the egotistical Dr. Irving Baer, whose reluctance to commit to the importance of vaccines for children one way or the other has been misinterpreted as his being anti-vaccine. This has led some of his devoted viewers to refuse to vaccinate their children, a couple of whom have recently died in a measles outbreak. River Thumbolt (yes, it's her real name) has used that unfortunate event as the basis for a magazine "expose" of Dr. Baer, putting his lucrative empire at risk, and setting off an increasingly vindictive battle between doctor/TV star and ambitious journalist.

Also involved is Dr. Baer's seemingly spineless assistant/sometimes co-star Nurse Kelly (Jackie Chung), his human bulldozer wife Meredith (Jessica Gilsig) and Brock (Nicholas D'Agosto), an ardent online anti-feminist who becomes an unlikely secret ally. The cast is terrific, especially Gilsig, who elevates Meredith beyond more than just a stereotypical high-maintenance trophy wife. I thought that Shoniqua Shandai, who played River, was distractingly wooden in her first scene where Baer confronts her about the article (she seemed to be reciting her lines), but it may have been her way of playing River as smugly confident of having the upper hand over her subject. She warmed up later in the play as River got a taste of her own medicine when her own dirty little secret and emotional baggage were revealed.

The play takes aim at modern-day yellow journalism, social media, the wellness industry, the weight loss industry, feminism, anti-feminism, daytime television, and fame (both the acquisition and the loss thereof), and it does so with a pleasantly surprising even hand. Brock could easily have been a right-wing nut job caricature, but he's probably - at least outwardly - the sanest of the bunch. When Baer learns that River's article has earned her an interview on CNN, Kelly tries to calm him by noting that, "Nobody watches CNN." A lot of potshots that could have been taken were not, which was a refreshing change compared to a lot of entertainment these days, and it was much appreciated by this audience member, as that kind of stuff takes me out of the story when it gets too heavy-handed.

I also absolutely loved the set, which is Dr. Baer's office in various forms as his career deteriorates and his mania to salvage it while also digging up dirt on River progresses. As a career assistant, it reminded me of every office of a high-ranking executive that I've ever been in. I was so taken with it that I asked for (and received) permission to take a picture of it.


"Quack" runs through November 18, so you still have time to check it out.

Posted by Melinda at 8:39 AM
Labels: Culver City, Theatre