In case you've been living under a media-free rock the past few days, actresses Felicity Huffman (who, ironically, recently played a Special Agent on Get Shorty) and Lori Loughlin (along with husband/fashion maven Mossimo Gianulli) are among a boatload of people busted by the FBI for fraud this week in a college admissions scandal. Along with a bunch of other rich elites whose rugrats couldn't make the university cut without Mommy and Daddy's high-priced intervention, Huffman and Loughlin paid bribes to get their underachieving brats into such lofty institutions as USC, Yale, Stanford, UCLA, and Georgetown.

Just to make this even more fun, apparently Loughlin's daughters were more interested in their burgeoning careers as YouTube and Instagram "influencers" than academics. They didn't even care about attending college, yet Mommy and Daddy rammed through their admissions at the expense of other, more qualified applicants. And they didn't just make "donations" to grease the wheels, they went the extra mile of having their little darlings falsely classified as athletes (rowing crew to be specific) to facilitate their acceptance, despite the fact that neither girl actually participated in the sport.

The axes have already started to fall. Hallmark just dumped Loughlin from multiple projects which, unfortunately, is going to cost a lot of innocent people their jobs. One of the Gianulli girls, Olivia Jade, just lost a partnership with Sephora. My not-so-extensive experience with "social media influencers" is pretty much limited to their participation in the Fyre Festival and now Olivia Jade; in other words, they seem to be vacuous idiots willing to sell themselves to anyone who can meet their price and feed their ego. I can only hope that that every time one of these so-called influencers are exposed, a few of their followers realize how empty their celebrity is and move on from supporting that sort of thing. Also, am I the only one who looks at Olivia Jade's photos and think that there's no way she ever reached that status without having rich celebrity parents? There's really nothing exceptional about her appearance. I've seen genuinely prettier women in offices I worked in. So again, she benefits from her parentage.

Then there's the critically lauded Huffman, who allegedly paid for someone else to take her daughter's SAT test (greatly improving her score) and whose online presence preaches empowerment for women and mothers - at least the Hollywood version - along with lots of feel good pep talk tweets and positive thinking memes. 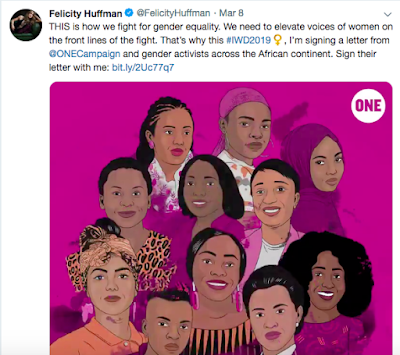 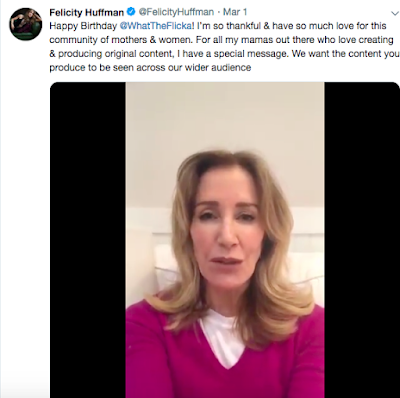 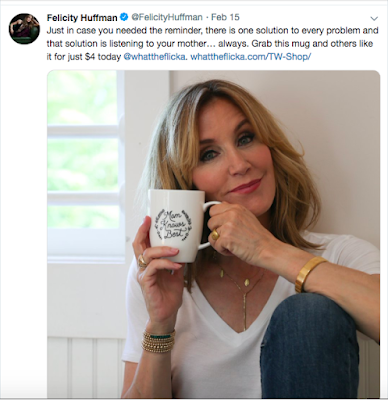 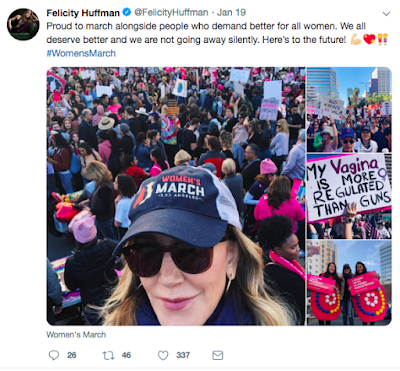 Huffman's corresponding project, What the Flicka, seems to have been scrubbed from the internet - its Twitter, YouTube page and website are all gone. Her personal Twitter is still up and public; I figure it's still there for one of two reasons - she just hasn't gotten around to locking or deleting it, or it's going to be used for image rehab, complete with self-serving mea culpas and apologies. I'm sure her PR people are busy bees right now, especially since the investigation could also pull down the successful career and public image of her husband, actor William H. Macy.

UPDATE: Sometime between my writing this and pulling screenshots of some of her tweets and posting this, Felicity Huffman's Twitter account was deleted. I discovered this when I was testing links in my post.

In addition there is already a lawsuit filed on behalf of a student who applied to many of the affected colleges, was not admitted, and is claiming that this fraud cost him a spot. Not sure how this will actually fare in court, but I'm pretty sure it's only the first of many. There must be a lot of exceptional students out there who are wondering if one of the Huffman or Loughlin girls took a spot that should have been theirs.

Not that I ever take instruction on how to be a better person from celebrities and/or other movers and shakers, but their online presence frequently not only builds themselves up, but also seeks to tear down those who don't share their political and spiritual beliefs, or support the causes they support. I have nothing personal against either Huffman or Loughlin, nor am I generally the vindictive sort, but I also do not have a problem seeing hypocrites (bonus points for being rich and famous hypocrites) being pulled down from their lofty perches and being called out for actions they would crucify others for while committing the same offenses themselves, because in their world, some animals are more equal than others.

It will be interesting to see how this plays out, and if these rich, famous criminals get the same sentences the rest of us nobodies would get if we'd committed these crimes.

UPDATE: Actor Dean Norris (DEA Agent Hank Schrader in Breaking Bad) went off on "rich fuckwads who cheated for their already privileged kids". Norris got into Harvard without benefit of any wealth, privilege or fraud. I hope this becomes the trend and not the exception, as Hollywood tends to protect its politically correct own. Again, it will be interesting to see.