Recent Reading: "The Wrong Side of Goodbye" 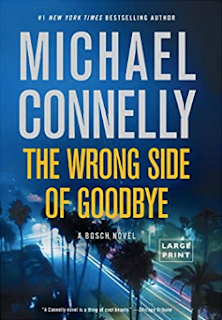 Harry Bosch is retired from LAPD and working part-time for the San Fernando Police Department. He is also freelancing as a private investigator and it is as a P.I. that he is enlisted by Whitney Vance, an extremely elderly billionaire who as a young college student was involved with a Mexican girl who became pregnant. His family disapproved and the relationship ended to Vance's everlasting regret. He wants Bosch to find out if he has an unknown heir via that pregnancy, so that he can try and finally make things right in some way.  It's an assignment that leads Bosch on a fascinating journey that touches on a variety of worlds and eras, including the Vietnam War and the recent gentrification of Downtown L.A.'s Arts District.

Bosch is also tracking a serial rapist as a member of the SFPD. He usually doesn't have trouble juggling cases, but this time it causes a conflict that results in Harry making choices that could endanger his SFPD partner.

While not my overwhelming favorite Bosch novel, both cases make fascinating studies on how one decision can calamitously affect and change so many lives.

There was a glitch on one of the discs that caused me to have to skip over a track or two. I don't think it was anything that made it hard to follow the story to its resolution, but it also caused me to toss the discs before thinking to pull a quote.