Another California Crime Writers Conference is in the books

California Crime Writers Conference is a bi-annual co-production of Sisters in Crime/Los Angeles and the Southern California chapter of Mystery Writers of America. While shorter and smaller than conferences like Bouchercon and Left Coast Crime, it gets a lot of the same writers as the bigger conferences. Plus it was good to spend the weekend on the westside. Cool weather, ocean breezes, even the 405 wasn't so bad.

I got to reconnect with a couple of people as well as my editor from LAst Resort. I also learned who will be writing the forward for Crossing Borders and I was thrilled by the choice. It hasn't been announced yet, so I'm not going to jump the gun here.

My two favorite panels were the TV writers and The Dark Side: Thrillers, Suspense, Noir. From the TV panel I learned that not all TV writing staffs have a room, which surprised me. I thought all shows had a writer's room. I also gained a better understanding of the current rift between the Writer's Guild and talent agencies. From another panel I learned that if you're looking for an agent, Thrillerfest's pitchfest is the place to go. Apparently it's a pitchfest on steroids.

I came home with six new books, although in my defense one was in my book bag and two were from the freebie room. 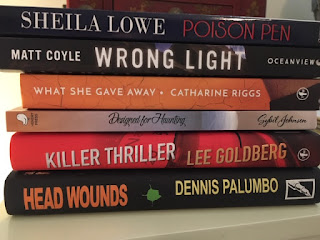 One of the neat things about CCWC is that lunch is provided both days. Both lunches were pretty good, but it was the desserts that really impressed. The cakes were very rich and they gave us huge slabs. I was only able to finish about half on both days and considering my appetite, that should give you an idea of how substantial the dessert servings were. This was from Sunday: