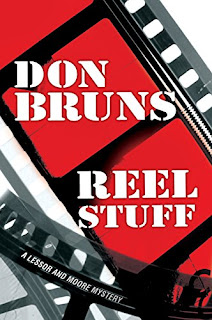 I picked this up at a writing conference and Mr. Bruns was kind enough to sign it for me. 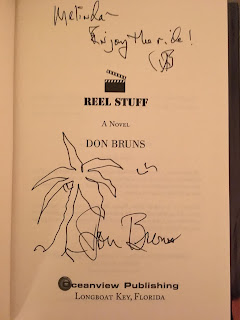 He even drew the palm tree! How cute is that? And as for what he wrote to me, I did indeed enjoy the ride.

Private investigator Skip Moore is working security on the set of the TV show Deadline Miami, where Oscar-winning actor Jason Londell is making a guest appearance as a favor to the show's producer, a longtime friend. And to the despair of the episode's director, Londell is insisting on doing his own stunts, in this case jumping off a building. But that stunt turns deadly when without warning, Londell leaps to his death on the pavement below, far from the giant air bag that he was supposed to hit.

Moore, his PI partner James Lessor, and Skip's stunning girlfriend Emily get roped into investigating what increasingly seems like more of a murder than a suicide. As part of the investigation Skip and Em head to from Miami to Hollywood to investigate Londrell's estranged wife/ex-agent, which unexpectedly leads to Em getting booked on a pilot, a development that turns her usually level head when it awakens long-dormant glamorous dreams. Meanwhile, Skip in L.A. and James back in Miami sift through a large, interconnected cast of suspects, trying to figure out the who, how and whys of Jason Londell's shocking death.

Bruns writes short chapters and that, along with his characters and fast pacing, propel the story forward non-stop so well that I finished this in one day. The closer I got to the end, the harder it was to consider putting it down. It was a wild ride.

"Sometimes it's just stupid to do your own stunts." The director let out a long sigh, shaking his head. He looked at me and said, "We've got stunt guys who can do this jump with their eyes closed, so why the hell does this prima donna think he should do it himself? Damned actors. Life would be a lot simpler without them."