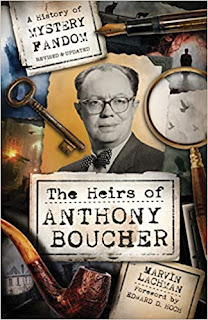 The Heirs of Anthony Boucher by Marvin Lachman

Subtitled "A History of Mystery Fandom" this is much more than the retrospective on the annual mystery convention Bouchercon and its namesake, writer, editor and critic Anthony Boucher. It is a history of the fandom, beginning in 1967 with early fanzines and get-togethers long before the internet made online communities possible. In fact, the first Bouchercon doesn't appear until Chapter 6.

What follows is an incredibly comprehensive of what appears to be every fanzine, magazine, and convention that followed (including Malice Domestic, Left Coast Crime, New England Crime Bake, CrimeFest, and ThrillerFest) as witnessed by someone who was an extremely active participant in their history. Lachman wrote and participated in numerous fan publications and conventions and as such is able to bear witness to this rich history.

Originally published in 2005, winner of the 2006 Anthony Award in the Critical/Non-Fiction category, and updated in 2018, the book includes recaps of every Bouchercon up to last year's in St. Petersburg. I attended my fourth Bouchercon in Dallas recently and was blown away by how much of the fan emphasis I've missed. As someone who approached it not only as a fan but as an aspiring author, this was an aspect of the history I was ignorant of but now have a better appreciation of. Bouchercon 2020 (Sacramento) had a table at Dallas and a very nice lady there encouraged me to volunteer next year. I had declined to do so in the past because I was there for the panels and didn't want to miss out on them. But after that conversation I had pretty much decided it was time to give back and help out. After reading this book, it's definitely decided. This is a community I want to be a more active part of. I don't think I realized how fan driven the organization of these conventions are, despite the enormous undertaking in staging these events. I have a much better appreciation for it now.

One of the things I found funny was reading about Bouchercon 2013, which took place in Albany, NY. On Wednesday in Dallas we shared a lunch table with a couple of lovely ladies, one of whom was Molly Weston, editor of Sisters in Crime's newsletter, and the subject of Albany came up. She proceeded to tell us it was pretty much a disaster. Lachman confirms that in his recap. He quotes writer Lee Goldberg as describing it as "the worst location and the most poorly organized Bouchercon I've been to." But bad Bouchercons are few and far between. Dallas - both the convention and the hotel/location - were awesome.

Lachman also touched on how, as the internet came into being, attendees began blogging and documenting their Bouchercon experiences online. It made me realize I used to do much more comprehensive recaps of the panels I have attended at past events, and I think I need to start doing that again.

Bouchercon began in a bar. Writing about its origins in the 1991 Bouchercon program, Len and June Moffatt recalled that in a bar, at the close of a July 1969 science fiction convention they were reminiscing with Bruce Pelz about Anthony Boucher and his enthusiasm for both science fiction and mysteries. Pelz said, "I wonder if it is time to put on a mystery convention." There had never been one.