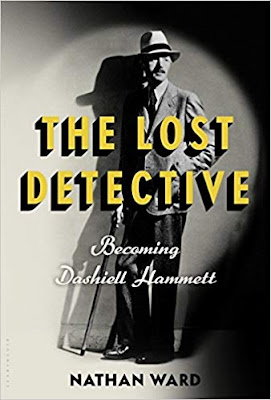 Before reading this Edgar-Award nominated book I was unaware that Hammett, the author of The Maltese Falcon and The Thin Man (which became one of my all-time favorite movies), had once been a Pinkerton detective.

Tuberculosis kept Hammett from making Pinkerton a lifelong career, but when he finally had to give up the work due to his poor health, he used his sleuthing experiences to embark on a second career as a writer. He held most pulp stories and fictional detectives and private eyes in disdain because he found them so unrealistic, and set out to create more realistic characters.

This book is not an autobiography - I had to get online to find out that Hammett and his wife did eventually divorce, that he joined the Communist Party and eventually ran afoul of the House Un-American Activities Committee, and even served time in prison due to his Communist involvement. Ward's focus is how Hammett's time with Pinkerton informed the great novels he went on to write, how his writing career developed and into the early years of his relationship with the writer Lillian Hellman, with whom he spent the last thirty years of his life. It's also a fascinating look at Pinkerton exploits and how real life sleuthing works.

By comparison, Hammett's Op had wrung some handy knowledge from his rough life of sleuthing: Abductions rarely occur at night or in cities, and those that do more likely are staged by the victim for ransom; no one can strangle your from the front if your arms are free to reach up and snap his pinkies; when a "Chinese" starts shooting, he always empties his gun; you can shadow anyone pretty naturally if you don't meet the subject's eye; it's best to stand aside of the door during "unannounced" visits in case bullets burst through it; even a light tap on the head with a metal revolver has a surprisingly concussive effect; you can often draw good information or even a confession "out of a feeble nature" by putting your face close to the subject's and talking loudly; people talk more freely in a room with a closed door; and any hop head who tells you his name is "John Ryan" is not to be trusted ("it's the John Smith of yeggdom").