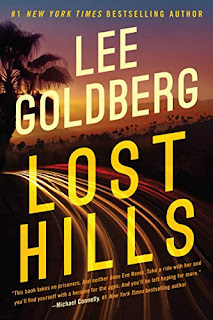 In between his Ian Ludlow series, Goldberg managed to crank out the first book of a new series featuring young L.A. County Sheriff's Deputy Eve Ronin.

Ronin was promoted to homicide detective after a video of her wrestling a famous actor to the ground because he was assaulting a woman went viral. Her newfound and unwanted fame also helped take the media's focus off police brutality issues plaguing the department. But although happy with her promotion, she finds herself in the unenviable position of being resented by other older, more experienced detectives who consider her advancement unearned and undeserved.

Ronin gets a chance to prove herself when she and her partner are called to the scene of a heinous triple homicide involving an abused single mom and her two children. Goldberg keeps the action moving and threw in a nice twist at the end that I never saw coming. And in a weird twist a massive brushfire factors into the book's climax, and in the author's afterword Goldberg notes that shortly after receiving the copyedited manuscript of Lost Hills from his editor, he and his family had to evacuate their Calabasas home due to the disastrous Woolsey Fire. Luckily, his house survived.

Highly recommended and I'm looking forward to the next Eve Ronin book.

Garvey wasn't intimidated. "What did you expect? A standing ovation from the guys who actually earned their promotions?"

"No, Tubbs, this is exactly what I expected." Eve stepped away from him and shifted her gaze between the three men. "Because it's the same sexist attitude that would have shut me out of Robbery-Homicide for another ten years . . . and that I still would have faced if I ever got in. So I used the leverage that video gave me to get myself here overnight. Did I leapfrog over people who've been struggling to get into Robbery-Homicide for years and haven't made it? Yes, I did. Do I care? Nope. Do I deserve to be here? It doesn't matter because here I am, boys. You don't like it? Too bad. Suck it up or get out. I'm sure the sheriff will give me two other detectives to replace you. They might even stay."

I'm glad you liked LOST HILLS! And you managed to spotlight one of my favorite bits of dialogue, too. Thanks! Lee