There are epic public relations disasters, and then there's Entercom/KROQ's firing of Kevin Ryder

Not sure how I didn't hear about this sooner, but early this morning I learned about KROQ's unceremonious dumping of Kevin Ryder and everyone associated with his morning show yesterday morning. And as if unexpectedly axing a hall of famer who spent the last thirty years building your brand wasn't shitty enough, someone who is still actually working there thought posting this to KROQ's social media was a good idea: 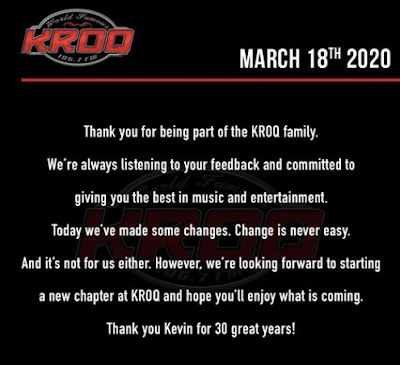 I'd love to be a fly on the wall among management this morning as they review these comments. With this one badly handled decision they just erased KROQ's standing in the Los Angeles radio community. I couldn't have done a better job of destroying the station in one fell swoop if my life depended on it. It's really kind of amazing, albeit in a truly awful way.

I've been listening to KROQ pretty much all my life that I can remember. Entercon, on the other hand, I've never heard of, but I do know this about them: They have no concept of their audience. They don't know the listeners, they don't know the community, and they obviously have no idea of KROQ's history, importance, and place in said community. Or, even worse, they just don't care. Either way, they just cratered KROQ's audience and ratings.

For some strange reason - even though they had three guys escort him out of the building - the station's management did let Kevin on air to say goodbye to the listeners. And he didn't go quietly. Good for him. His criticism pales in comparison to the online reaction from KROQ listeners, who are incensed over the loss of the morning show that has been such a huge part of our lives for decades here in Los Angeles. Kevin and Bean got me through a lot of shitty commutes over the years and provided me and a lot of other people with countless hours of awesomely hilarious entertainment for which I'm incredibly grateful.

The funny thing is that I was out uncharacteristically early Monday morning running errands and came across Kevin's morning show on KROQ, and although I don't listen much these days since I don't commute, it was nice to hear his familiar voice on the radio. And now that's gone. I honestly think KROQ's listenership and ratings are going to crash spectacularly because of this decision, and I hope heads at Entercom will roll as a result. There are ways to run a business and this ain't one of them.

If I was currently running a rival station in L.A. I wouldn't be able to hire Kevin fast enough. And when someone does, I'll be tuning in.

Posted by Melinda at 8:17 AM
Labels: I Customer, In the News, Jerks, Los Angeles, Media, Music, Pasadena, Radio, Rants