Actual headline on page 19: Blow It Up! Blast the AC and enjoy life indoors with spicy hot sauces, awesome new TV shows, and virtual Pride celebrations. Plus chic summer fashions (and masks) for venturing out.

Seriously Los Angeles Magazine??? Apparently I completely missed that the past couple of months have been one big carefree party that our political overlords seem determined to continue indefinitely. My invitation must have gotten lost in the mail.

I guess I shouldn't be shocked. This is the same magazine whose cover currently sports these headlines: INSIDE THE BUNKER WITH ERIC GARCETTI The Mayor's Epic Battle To Save Us From The Plague and KINGS AND QUEENS OF THE QUARANTINE. The list of virtual pride festivities on page 38 bears the title PARTY STILL ON!

Gotta say, I haven't seen quarantine coverage this tone-deaf since Nancy Pelosi Antoinette posed in front of her $10k+ fridge, showing off cartons of ice cream whose price tags would have Whole Foods agape. 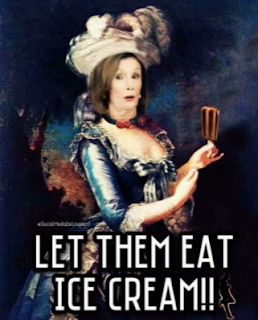 A quick glance through this rag would suggest we've spent the past two months partying like it's 1999, rather than suffering through an unprecedented societal and economic disaster that may or may not have been completely necessary depending on which doctors you listen to, and may or may not be at least partly politically driven at the expense of hard-working, law-abiding people who deserve better.

I've seen a couple of stories online just in the past few days about people committing suicide due to their livelihoods being destroyed by the lockdown and I expect to see more. A few days ago I watched a video of a man in tears because he's losing his life's work, a humble music store, also due to the lockdown. The tone of those stories are nothing like Los Angeles Magazine's giddy hipster headlines.

You know who isn't going to go broke or lose their livelihoods? You know who won't be sobbing on camera because their businesses have been destroyed, who won't be offing themselves because life has become unbearable through no fault of their own? People like Nancy Pelosi, Eric Garcetti and their ilk. They are going to be among the few who emerge from this situation feeling like kings and queens of the quarantine, while most of the constituents they don't give a shit about will find themselves newly cast as paupers, many in spite of a lifetime of hard work.

The magazine's rah-rah approach to what's happened to us since mid-March is jarring. I'll be interested to see if in future issues it profiles Angelenos whose businesses and lives were destroyed by the mayor's epic battle with the flu (fixed it for ya, Los Angeles Magazine) and the open-ended shutdown Garcetti and California Governor Gavin Newsom take such delight in threatening us peons with. Given that the magazine reads like a mouthpiece for those guys, I doubt it. The few paragraphs given to Californians rallying for the lockdown to be lifted before the state's economy is totally annihilated is tellingly titled JOINING FORCES FOR NO GOOD. Yep, tone-deaf.

On the other hand maybe I should take into consideration that Los Angeles Magazine isn't aimed at the average Angeleno like me, but at the city's elite, people who can weather prolonged loss of earnings, or like our politicians, haven't missed a paycheck. It's not geared to the Los Angeles I'm a part of. I wish this issue had come out last month, because I just sent in the renewal a few weeks ago and I wouldn't have if I'd seen this issue before I wrote that check. Turns out that probably wasn't a great use of my money. Oh well, guess I'm just gonna have to pass on that fashionable Johnny Was face mask touted on page 32.

Posted by Melinda at 10:56 AM
Labels: California, Famous Idiots, I Customer, In the News, Jerks, Los Angeles, Magazines, Media, State of the Union, Writing