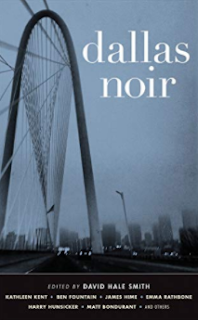 Dallas Noir is an installment of the "Noir" series from Akashic Books. I bought it after returning from my trip to Dallas late last year because I was just so taken with the city, at least the small part of it I got to experience.

Gotta admit it wasn't my favorite of anthologies, but that could have something to do with me not being a Dallasite. Each story is set in a different part of town, so they might be more meaningful for readers who live there. I think that's the case for me when I'm reading Southern California-based anthologies. I also think that the darkness of the stories (despite the fact that I do love tales of noir) clashed with what I saw when I was there, which was a clean, beautiful, friendly city. I'm sure it has its seedy underbelly and maybe I just wasn't ready to see it yet.

A lot of the stories were good. IMO "In the Air" by Daniel J. Hale (Deep Ellum), "Night Work" by Clay Reynolds (Old East Dallas) were the best and my favorites.