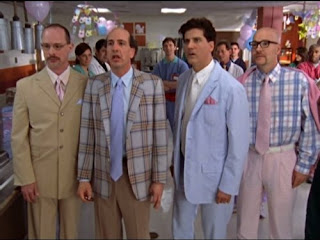 In early 2019, having just become a father, Lloyd was diagnosed with cancer that had spread to his brain, lungs, spine and jaw. It was a horrific diagnosis and when the Scrubs podcast began last month I wondered how he was doing and if he would be able to make an appearance on the podcast. I also wondered if it would be okay to inquire about his condition and well-being.

Those questions were answered when he died yesterday.

My heart goes out to his family and friends. I can't imagine what it must be like to receive a diagnosis that was so awful at his age, much less just after the birth of his child, who he will not see grow up and who is too young to retain any concrete memories of his father.

Scrubs was a great show. It brought (and continues to bring) me hours of enjoyment with its amazing writing, acting and storytelling. Lloyd was a part of the great ensemble that made Scrubs exceptional and it's heartbreaking to lose him, and that's coming from someone who only knew him as a viewer. I can't imagine how devastating this is for his family and friends. I know it will be tough for Zach and Donald to discuss this on the podcast, but as a fan I hope to hear a lot from them about Sam.

Posted by Melinda at 8:23 AM Labels: Podcasts, Television