The Do's and Don'ts of The Obligatory Apology

The former golden boy of the progressive left (courtesy of his haranguing then VP-elect Mike Pence from the stage after being tipped off he would be attending a performance, and issuing a Hamilton casting call requesting that no white actors apply) found himself being eaten by his own when the film version of Hamilton was released over the weekend on Disney+. Apparently a lot of keyboard warriors, many of whom probably paid through the nose to see the show on stage and worshipped Miranda in the past, have decided that he should have demonized his characters more, rather than celebrating them for launching the greatest country in the world. 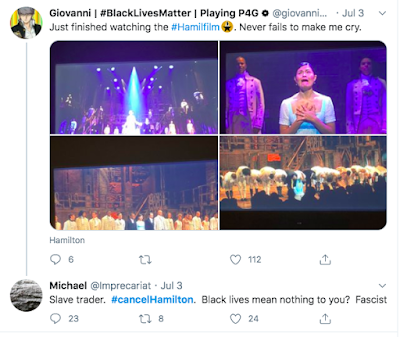 Miranda didn't apologize so much as passively agreed with the criticism while making a plea for the creative process. But he did cave:

"All the criticisms are valid. The sheer tonnage of complexities & failings of these people I couldn't get. Or wrestled with but cut. I took 6 years and fit as much as I could in a 2.5 hour musical. Did my best. It's all fair game."

MY VERDICT: Dude, where's your balls? The correct response is, "Hey losers, I took 6 years of my life, busted my ass, and fit as much as I could in a 2.5 hour musical. Did my best. If you think you can do better, then do it. I'll wait. No? That's what I thought. Now fuck off, I'm busy overachieving."

But either way, I think Miranda can forget about completing his EGOT with this one. Too "problematic" for our enlightened era. I just think he should have manned up and called out the hypocrisy of calls to cancel a work of art that was lauded as progressive genius just within the last five years.

Despite being a CBS golden boy with his hat-trick of reimagined classic TV shows, Lenkov was unceremoniously dumped by the network this week due to fostering "toxic work environments" on his shows. This news came out of nowhere - at least to the public - and not only cost Lenkov the reins of MacGyver and Magnum (H50 recently concluded its run) but also the final year of what was no doubt quite the lucrative producing deal, not to mention future opportunities to reboot every single show ever aired in the history of television.

Lenkov sounds like a real piece of work. He was reportedly dismissive of female and POC writers, gave preferential treatment to "his boys", and was just an all-around jerk. And he's been doing it for years - there's even stories from his tenure on CSI: NY, which he worked on way back in 2005-2010 - and despite the millions he's probably earned for the network over the years, CBS finally had to deal with him due to multiple complaints.

I don't know how you fuck this up. All he had to do was be a halfway decent guy. I was working in post-production when CBS was trying to reboot H50 and a big part of my job was tracking shows in development. The new Hawaii
Five-0 was something that took a couple years if I remember correctly and it was something that CBS really wanted to make happen. In addition they were also trying to make Alex O'Loughlin happen, and Lenkov is the guy who came up with the pilot script that finally got the Five-0 reboot with O'Loughlin in the lead role off the ground and on the air. Plus, I remember being at a Screenwriting Expo around this time where producing partners Roberto Orci and Alex Kurtzman were discussing the reboot and raved about Lenkov's pilot script.

Then Lenkov managed to launch two more reboots that nobody outside of CBS were clamoring for (MacGyver in 2016 and Magnum P.I. in 2018) and somehow made them successful, or at least successful enough to survive on Friday nights, usually a graveyard for TV shows. The man was a machine and all that machine needed to do to continue to thrive at CBS was just behave himself. He didn't, and now the machine has been brought to a screeching halt.

One thing Lenkov is definitely NOT good at writing is a decent apology for being an asshole:

MY VERDICT: WRONG!!! This is barely even a damn apology; it's just a half-hearted steaming pile of buzzword salad. And no, I don't buy that he's "deeply sorry" about the shitty work environments he foisted on his "colleagues". What he's deeply sorry about is getting busted and shit-canned.

Successful showrunners make bank, so he probably has more than enough money to retire on now, which leads me to think he just doesn't give a crap with this half-assed statement. It's like he thought, you want a statement? Here's a statement. Now piss off while I bathe in my millions.

Update 7/21/20: Hoo, boy, just when I was noticing that this story seemed to have fallen off the face of the earth, Vanity Fair exposes more horrific details of Lenkov's reign of terror, including abuse of his MacGyver stars Lucas Till and Meredith Eaton. I figured he bullied the behind the scenes staff, but his stars? Also more stories of toxic sludge and a non-stop barrage of denials from Lenkov through his lawyer makes me think this story isn't, in fact, going to go away any time soon.

Berry made the mistake of just mentioning that she was excited about tackling the role of a female to male transsexual in an upcoming film. Cuz you know, that's what actors do. They play roles. She made two other mistakes, according to The Outraged of Social Media: she considered playing a role that isn't exactly what she's like in real life, and she didn't nail each and every personal pronoun by magically and instantaneously undoing 50+ years of habit and conditioning. You all know the drill by now - the backlash was unleashed and Berry dropped out of consideration for the role and posted the obligatory apology:

"Over the weekend I had the opportunity to discuss my consideration of an upcoming role as a transgender man, and I'd like to apologize for those remarks. As a cisgender woman, I now understand that I should not have considered this role, and that the transgender community should undeniably have the opportunity to tell their own stories. I am grateful for the guidance and critical conversation over the past few days and will continue to listen, educate and learn from this mistake. I vow to be an ally in using my voice to promote better representation on-screen, both in front of and behind the camera."

MY VERDICT: Bravo to whoever actually wrote this! Probably her publicist. This statement hits every bullet point on the obligatory apology checklist. Let's hear it for an award-winning actress promising to never, ever, play a character that is the least bit different than who she is in real life.

On the other hand...woman, you are an actress. It's your job to play a variety of people/types and if you pulled this off you might have been looking at another trip to the Oscars. On one hand, I think she folded too quickly and easily. But on the other hand, if POC are no longer off-limits to the outrage mob I can see where she probably thought fuck it, I'm not playing this game, and decided to cut her losses and move on.

Look, I'm not the biggest Halle Berry fan in the world but if you get the chance to cast her in your movie, you do it. She comes fully equipped with a built-in fanbase/audience, she's a freaking Oscar winner, and a big name that will get your project both financing and publicity. And as for a non-trans telling your story, she brings attention and prestige to your story that a lesser-known trans actor may not be able to do. That's how Hollywood works. It will be interesting to see if that film can get financed without a well-known, award-winning actor or actress in the lead.

Also, am I the only person who noticed that this situation involved telling a woman of color to know her place? So racist.


Exhibit 4: Leonydus Johnson (Actor, neither French nor a candlestick, but in the running to be my new imaginary boyfriend)

In response to Berry's obligatory apology, this popped up on my Facebook feed yesterday: 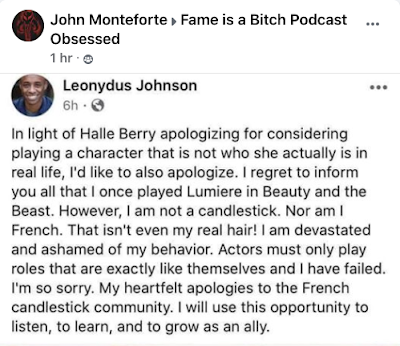 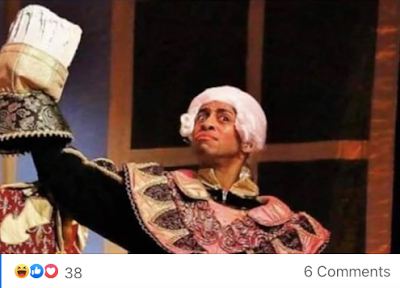 MY VERDICT: Okay, you see this? This is how you deal with the outrage/cancel mob! This is how most of the real world reacts to these situations. Plus, gotta love a guy with a sense of humor. Well, I do anyway. Seriously, how much fun would it be to hang out with Leonydus?


Up next: Since we're talking celebrity foibles, I predict the next cringe-worthy "apology" will be coming from the band formerly known as Lady Antebellum. These pinheads got themselves into the news recently by changing their name to "Lady A" after the rioting started. Unfortunately for them, no one seems to have done due diligence, because it turned out there's a female musical artist named Anita White who has been going by the name "Lady A" for 20+ years. Bonus points: Ms. White is African-American!

Apparently the parties tried to come to a co-existing agreement that didn't pan out, so get this: yesterday, it was announced that the recently christened Lady A (the band) is suing the longtime Lady A. Come for the hypocrisy and pandering, stay for the awkward obligatory apology! Seriously, whoever is making these decisions for this band needs to just stop. Just. Stop.