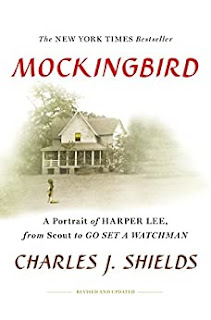 Mockingbird: A Portrait of Harper Lee by Charles J. Shields

Nelle Harper Lee's reclusive life post-To Kill a Mockingbird makes it difficult to write her biography, something Shields makes clear in his forward. However, to his credit, you'd never know it based on this comprehensive story of the woman from small-town Alabama who wrote what became one of the all-time great American novels.

Having to work without the cooperation of his subject, who was still alive at the time, Shields contacted anyone he could find who ever knew Lee. He joined an online reunion service and tracked down people who had attended school with her. He bought a 1945 University of Alabama yearbook on eBay, and went through archives and libraries. The result is a lot of information on her early years that establishes her as an outsider who wasn't terribly concerned about how she was viewed by others, and follows her slow but ultimately successful journey to becoming a successful author.

Lee's father hoped she would follow in the family business (both he and Lee's older sister Alice were lawyers) but although she tried, she loathed law school and wanted to pursue a writing career. She moved to New York City where she eventually wrote Mockingbird, and spent the rest of her life dividing her time between New York and her hometown of Monroeville, Alabama. Despite her quirks, she had a group of friends, her agent and editor among them, who considered her gifted, supported her, and genuinely loved her.

I would have liked to have seen more of her interactions with Truman Capote in the later years following Mockingbird and In Cold Blood. Capote was a childhood friend, but he embraced the celebrity lifestyle and his growing notoriety as much as Lee rejected it. He could be cruel to her - despite the amount of work she contributed to In Cold Blood, she was reduced a dedication "with love and gratitude" despite the fact that Capote himself admitted to another author that he couldn't have written the resulting book without her help. Lee later told a friend that she was both hurt and angry that Capote didn't give her more credit. Shields describes it as "a betrayal". Part of it was jealousy - Capote was blindsided by the success of Mockingbird and envious when Lee received the Pulitzer Prize for it. Prior to its release she had been his research assistant, awaiting the publication of her first novel, during his first visit to interview residents of the farming community of Holcomb, Kansas about the brutal murder of the Clutter family. The pretentious and flamboyant Capote must have seemed like an alien to them, but the down-to-earth Nelle was able to make inroads with them that Capote would never have been able to do on his own. It's telling that after In Cold Blood was released, when Capote threw his extravagant Black and White Ball, Lee was among the 500+ invitees but declined to attend. Despite the damage done to their friendship, Lee never completely cut him off as many did, for reasons that she seems to have kept to herself.

A big part of Lee's story was her eventual failure to produce another novel following the success of To Kill a Mockingbird. It seems that for a number of years she was working on a second novel, until enough time had passed that she wasn't. In the mid-1980's, following Capote's death, Lee began research on what might have been her version of In Cold Blood. She became interested in the case of an Alabama man who killed five relatives for their insurance payouts, and who managed to escape conviction each time before being shot to death at the memorial service of his fifth victim, a niece. But she eventually dropped the project. In 2015, Go Set a Watchman, featuring an adult Jean Louise "Scout" Finch and initially promoted as a sequel to Mockingbird (only later to be exposed as an early draft of it), was released to mixed reviews. There was also the question of whether the now extremely elderly Lee was competent to agree to its release. Lee died in 2016 at the age of 89.

If Truman suspected the amount of damage he had done to their lifelong friendship, he doesn't seem to have taken special steps to repair it. For instance, he could have counteracted rumors that he had written all or part of To Kill a Mockingbird, but he never went to any strenuous lengths to deny it. And later, when In Cold Blood didn't win a National Book Award or a Pulitzer Prize, he used a little trick of backhanding his friend's success by asking interviewers if they'd ever heard of her book.