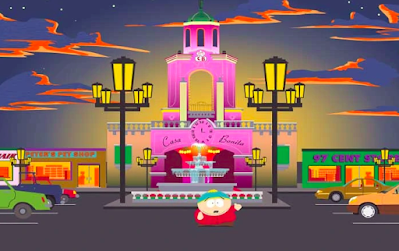 Casa Bonita, Denver's Disneylandish Mexican restaurant known to most of us non-Coloradans thanks to South Park, has filed for Chapter 11 bankruptcy. Hopefully Casa Bonita's owners can get back on their feet and get the place reopened, but according to the article they've been closed for a while due to the pandemic, so that might be wishful thinking. Nonetheless, I'm pulling for them.

The article also references a comment by Trey Parker that he and Matt Stone briefly considered buying the place a few years back. Considering that between South Park and The Book of Mormon those guys have to have more money than God, I think it would be super cool if they bought it now, or at least bailed it out. Their financial advisors might not agree, but I'd love to see that happen.

Posted by Melinda at 8:55 AM
Labels: Foodie Stuff, Television, The Plague, Theatre