Recent reading: "Are You Being Served? A Celebration of Twenty Five Years"

I've been binge watching Are You Being Served? on DVD and decided it was time to do more than just flip through this book. 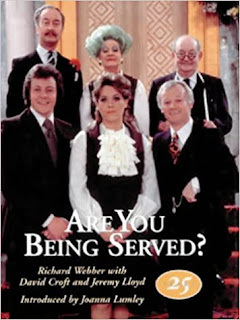 Are You Being Served? A Celebration of Twenty Five Years by Richard Webber with David Croft and Jeremy Lloyd

This book was published in 1998, thirteen years after the show ended and five years after its sequel, Grace and Favour (aka Are You Being Served Again?) left the airwaves. Despite its age, the upside is that with a few exceptions, most of the principles were still alive at the time the book was written and were able to contribute their memories of the show. Almost all have since passed away. It was kind of fun to read it as if they were all still with us.

The book covers how Are You Being Served? was conceived and developed by Croft and Lloyd, how it made its way onto air at the BBC (its studio-bound, non-location sets made it an inexpensive show to invest in) and its eventual world-wide popularity. It also covers the sequel Grace and Favour (aka Are You Being Served? Again!) which saw Mrs. Slocombe, Mr. Humphries, Mr. Lucas, Miss Brahms, Captain Peacock and Mr. Rumbold running a country inn left to them by Young Mr. Grace. Despite its popularity and the enthusiasm of both the writers and cast, it was cancelled by the BBC after only two seasons. The Beeb's reasoning is that they were moving in a new era in sitcoms and that AYBS's sequel represented the past.

Also included is a hugely popular AYBS stage play that the cast performed between seasons four and five and a less than successful TV movie.

I found it fascinating to learn the backgrounds of the cast, most of who had already experienced success, especially on the stage and in British television. Most were accomplished actors long before they stepped foot into Grace Brothers' Department Store. The book also covers a large number of supporting actors, including the sexy secretaries and nurses who saw to Young Mr. Grace and Mr. Rumbold over the years as well as numerous guest actors.

I think one of my favorite things about this book is learning that the cast and crew really were one big happy family, as cliche as that might sound. Watching the show you can tell the actors are having a blast, and it was a relief to find out that was an accurate observation.

Despite being dated, this is a great book for fans of AYBS. It includes a short forward by Joanna Lumley, who was briefly married to Lloyd and who appeared in two episodes.