The other day this popped up on my Facebook feed: Celebrating Every Publication by Kate Fellowes.

What Kate has done over the years is fill bracelets with charms relating to her stories and essays each time she's been published. She's currently on her third bracelet.

I thought it was a pretty cool idea, so I looked at my whopping four published short stories and started thinking about charms. Here's what I came up with.

1 - "Crime Drama/Do Not Cross", which appeared in LAst Resort, is a Hollywood-based story about a failed actress turned private eye, and who is obsessed with a CSI franchise-type show that is about to end its run. So I figured a Hollywood sign charm would be awesome.

I had a surprisingly tough time finding Hollywood-related charms. In addition, a lot of them are intended to have chains looped through them, while I'm looking for charms with clasps. So far this is the closest thing I've found and I'm not really sold on it. I love the comedy and tragedy masks, but not for this story. 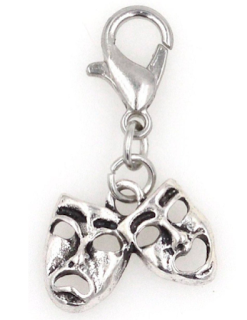 I did find this clapper board, but not happening at that price. Even the charms at Brighton (where I was really hoping to find what I needed to make this happen) aren't anywhere near that, and that is not an inexpensive place to shop. 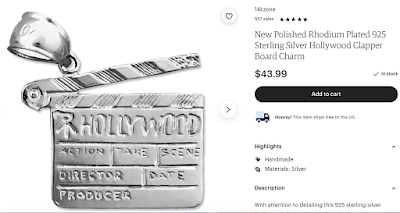 2 - "Like Deja vu All Over Again", which appeared in Crossing Borders, was based on a nightmare I had years ago about being carjacked. So obviously a car charm is needed here.

Again, I was surprised by the apparent lack of car-related charms. The car in the story is an old Toyota Corolla, so it can't be a fancy car. I might need to brainstorm this one a bit more.

3 - In "The Legend of Bahama Bobby", which was just published in The Fish That Got Away, Bobby is a painter, so something painterly, obviously.

I found the perfect charm here. Is this cute or what? 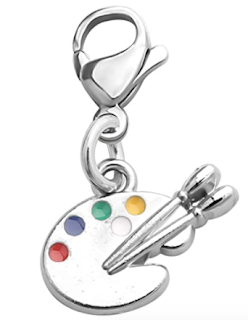 4 - Lastly we have "Christine Thirteen", which is just now being published in Avenging Angelenos (I'm still swooning over that cover). I don't want to give too much away, but the obvious choice is a disposable coffee cup with a lid.

I was surprised how few of these I could find. You'd think they'd be all over the place. I needed a cup with a lid as opposed to a cup and saucer, and eventually found this. 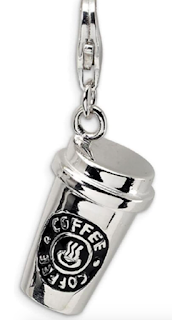 So far I haven't bought any of these because I don't want the collection to be spotty, but if I can find charms to go with all four stories, it's pretty certain I'll be adding to my jewelry collection. Plus, it would be a heck of a conversation piece, don't you think?
Posted by Melinda at 12:27 PM
Labels: Avenging Angelenos, Books, Cool Stuff, Crime, Crossing Borders, Foodie Stuff, Hollywood, I Customer, LAst Resort, Shopping, Short Stories, The Fish That Got Away, Venice, Westside, Writers, Writing