From the Department of Stranger Than Fiction: Jockey Frank Hayes

Despite a lifetime as a horse-crazy girl, a large part of which was as a horse racing fan, I had never, ever heard of this guy until this post about him popped up on my social media the other day: 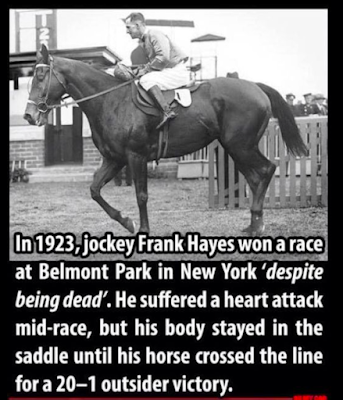 Frank Hayes is the only jockey to win a race while dead. No joke. He suffered a fatal heart attack during a steeplechase at Belmont Park in 1923, just after Sweet Kiss, his 20-1 longshot mount, took the lead at the head of the stretch, but his body stayed in the saddle until after the horse crossed the finish line. It was Hayes's first - and needless to say, last - win as a jockey. In fact, he's the only dead person to ever win a sporting event.

No one realized Hayes was dead until after the race. Belmont officials graciously waived the usual post-race weigh-in and because the jockey was still in the saddle when he crossed the finish line, ruled the win legit.

You can learn more about Hayes here (and do check out the links at the bottom of that page). Stranger than fiction indeed. And you'd better believe I'm adding this to my riding writing notes.

Posted by Melinda at 5:54 PM
Labels: Horses, I could use this in a script, Stranger Than Fiction, Writing