Like everyone else (with a soul) I've been riveted the past few days by the news of the tragic deaths of American troops in the explosion at Kabul Airport in Afghanistan.
One of the many things about this story that really got me is how young they all were. All but one were only in their twenties. The oldest of all of them was only thirty-one. One of the young men has a wife who is about to give birth. They were:
We all spent about twenty-four hours looking at pictures of them and reading about what wonderful people they were. The pain from family members has been palpable. Now these young heroes have been brought home to their loved ones. And here, side by side, are two of the most enduring images from their arrival at Dover Air Force Base.

If you feel like our country is drowning, you're not the only one. This also popped up on my social media yesterday: 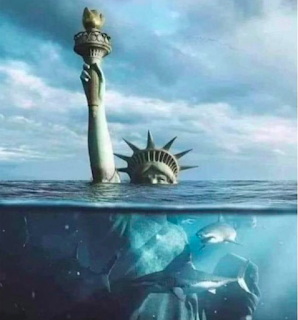 I usually try to keep the blog reasonably upbeat, but these are somber days. In fact, I kept finding more and more unpleasant reports from Dover, but at some point I needed to get this posted, so that's it for now. Probably more to come, if I can stomach it.
Posted by Melinda at 6:14 PM
Labels: Crime, Famous Idiots, In the News, State of the Union, Terrorism