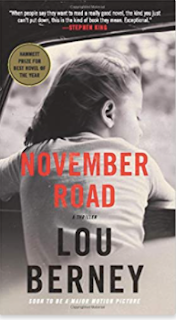 This is an absolutely riveting thriller set against the assassination of President Kennedy in November 1963. Frank Guidry has performed a job for his New Orleans mob boss that makes him expendable - a car he dropped off in Dallas, Texas could tie him and his boss to the assassination and his boss is tying up loose ends, if you know what I mean.

While on the run from Barone, the hitman dispatched to eliminate him, Guidry comes across a woman who, along with her two precocious daughters, are on a flight of their own. Charlotte has impulsively fled her alcoholic husband and small Oklahoma town, hoping for more from life than the tedium hers has become. At first Guidry views the innocent family as a convenient asset to his flight to safety - Barone isn't looking for a family or a family man. But by drawing Charlotte and her girls into his desperate bid to stay alive, he's putting them in danger as well. Matters are complicated even more when Guidry and Charlotte fall hard for each other.

Berney is a gifted writer and November Road is a non-stop thrill ride. You're immediately drawn in not only to the story, but especially to the characters. I had to find out how things would turn out for them and got through this book in just a few days. The ending was completely unexpected, salvaging the main characters believably and without tying everything up into a neat little package as a lesser author might have done.

November Road earned Berney a well-deserved slew of awards: the Ian Fleming Steel Dagger, The Hammett Prize, as well as Anthony, Barry, Lefty, and Macavity awards. It was named one of the best novels of the year by numerous publications. And I was thrilled to discover that a film version is in the works, with Lawrence Kasdan scripting and directing. I can't wait for casting announcements.

Berney has written three other novels (November Road being the most recent) and now I'm dying to read those as well.