The Demon Dog is apparently enjoying the podcast biz - it was just announced that James Ellroy is embarking on a second podcast project: an adaptation of his novel American Tabloid. From the linked article:
The idea is that the L.A. Confidential and The Black Dahlia author and the Jared Gutstadt-run company are going to go where many others - including David Fincher, Bruce Willis, Tom Hanks and James Franco - have tried and failed before and take his book from the page. But rather than make it as a film or a TV series, he's going to turn it into a 12-part audio project. 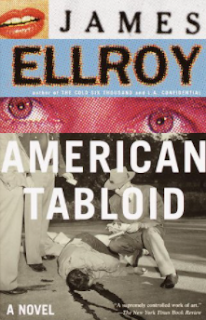 Ellroy's novels are notorious difficult to adapt, in fact in my opinion the only time someone was able to pull it off was the feature version of L.A. Confidential adapted by Curtis Hanson and Brian Helgeland (who won well-deserved Oscars as a result). I've found other movie versions of Ellroy's novels lacking, and even two attempts to adapt LAC to television (in 2003 and 2019) failed to get past the pilot stage.
Time will tell if this pays off, but it seems like Ellroy's found his sweet spot with podcasting. From the Deadline article:
Ellroy: "I read the narration. Hotshot actors read the dialogue. Now I know why God made me a bass-baritone. This podcast will work some jolting juju and incite incendiary insurrection in Radioland!!!!"
Audio-Up CCO Jimmy Jellinek: "Audio is the perfect medium to deliver American Tabloid," said Jellinek. "We can build out the book's massive internal world through sound. Traveling from the Jungles of Guatemala to Castro's Cuba, Mid Century Chicago, Los Angeles, 1963 Dallas and the Jim Crow South alongside these characters would be prohibitive...
...we're creating what may very well be the first true, scripted epic of the podcast era for what it would cost to feed the grips for half a day...
...When we're finished, you'll hopefully know we're the HBO or 70's Paramount of audio..."
Sounds ambitious and entertaining as hell if they can pull it off. And it's probably pretty much the only way you could dramatize a novel like American Tabloid. The novel runs 776 pages containing 100 chapters. When I was in junior high one of the local news radio stations played episodes of the old CBS Radio Mystery Theater (you can check out the shows at the link) and I loved listening to them. If American Tabloid succeeds, it could open the floodgates to tons of audio adaptations and I think that would be great, both as a listener and a writer.
The article also included the info that Ellroy's first podcast, now known as Hollywood Death Trip, will debut October 8 (which would have been my Dad's 81st birthday), so I'm looking forward to that.
Posted by Melinda at 11:59 AM Labels: Books, Cool Stuff, Crime, Film, Historic Hollywood, Historic Los Angeles, I Customer, Podcasts, Radio, Screenwriting, Television, Writers, Writing