So The Brother and I celebrated Christmas on the 26th, rather than the 25th, and the reason for the delay of the season was Sophie. 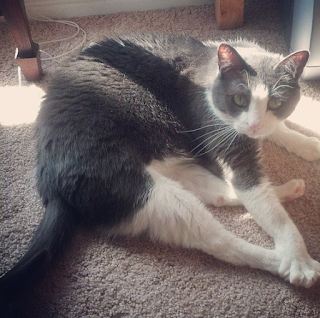 Sophie had to see her vet a couple days before Christmas because I'd noticed she hadn't been urinating at her normal volume for a couple of days. Normally she pees like a racehorse, plus cats with kidney issues urinate even more, so when suddenly there were a couple days of a fraction of the normal amount, I decided to run her to the vet. The good news was that the vet didn't seem overly concerned, figuring we might be looking at a urinary track infection, plus during the examination she mentioned that Sophie's heart sounds really strong. They took a urine sample, gave her some fluids and an antibiotic shot, and off we went.
When I went to clean the cat box on Christmas morning I was pleasantly surprised to see that the volume of urine was back up to her normal levels. She had been acting perfectly normal, so I wasn't prepared for what happened next. Around 8-8:30ish she started assuming the "trying to poop or pee" pose at various points in the apartment, plus up on my bedspread. She would strain for a minute or two then walk away, and I noticed each time she was leaving this small blob of gooey black liquid where she'd been. They cleaned up easily enough, but it kept happening and I was basically following her around the apartment with the pet stain cleaner mopping up after her.
After a while I decided she needed to see the vet. I had no idea what was coming out of her, what was causing it, or how long it would go on. It was also clear that she was not feeling well at all. My vet is closed on holidays, but I found an emergency vet in West L.A. that was open. I called The Brother, who greeted me with, "Merry Christmas!" My response: "Maybe, maybe not."
I was really worried about her. She was so quiet and still on the way to the vet that at one point at a stoplight I opened the carrier to see if she was still alive. I honestly worried that she might expire in the carrier before I could get her to the vet. I had no idea what the crap was that she was expelling. I thought she was dying on the inside. One has a tendency to get dramatic when one's beloved, precious pet is both elderly and chronically ill.
The good news is that it turned out to be a false alarm. She's fine. According to a very nice veterinarian who got stuck working on Christmas, Sophie was suffering from a simple case of diarrhea. I think of diarrhea as being - ahem - a bit higher in volume than little black dots, but whatever. The important thing is that she's okay. They sent her home with some probiotics that I somehow have to trick her into consuming, but whatever. The important thing is that she's fine.
She was a lot more animated (and vocal) on the way home, and in fact pooped in her carrier, which didn't make her happy. But it was nice and solid, and she obviously felt better. When I got home, she slept for a few hours on my bed, then came out and took her usual place in front of the fireplace. So crisis averted.
Due to me spending a couple hours at the vet, plus the prospect of another rainstorm that The Brother would have to drive in (we'd been trying to figure out how to work his drive around it) we decided to just hold off until the next day, which had the added benefit of having clear weather and we ended up having a great Christmas Day yesterday, December 26.
By the way, if you've made it this far and want to know why the hell you're reading about diarrhea, you have no one to blame but yourself. Welcome to our Christmas!
Posted by Melinda at 10:20 AM
Labels: Cats, Family, Holidays, LOL, Personal Drama, Sophie, Television