Oh, for the carefree days of yore (October 2020) when the incredible news of a new season of Dexter was announced.

And for the last ten weeks, overall I've been LOVING most of what I've seen in Dexter: New Blood. Even the few things that bothered me were put on the back burner in the belief that it would all tie together spectacularly, that the writers and producers were going to make good on their promise to undo the series "lumberjack" finale that disappointed so many viewers and make things right. And it was just so much fun to see Dexter himself again.
I personally was always on the fence about the lumberjack finale. I didn't want to see Dexter caught, imprisoned, or dead, but it also wasn't realistic that he could just get away with all those murders and the havoc his actions wreaked on everyone around him. What the original series finale showed was that although alive, Dexter still paid dearly for his transgressions in the form of losing everything: his family (Deb dead and Harrison sent off with Hannah), his city, his profession, his home, the whole existence he'd spent a lifetime building. He was left alone with pretty much nothing, in a foreign place doing manual labor. Everything but his freedom had been lost.
So, my observations about last night's series finale v.2? 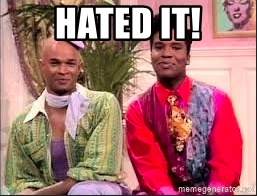 Why? So many reasons.
1: You don't kill the guy the audience is rooting for, especially when teasing the possibility of another season. The reason fans were so happy to have a new season was that we missed Dexter and wanted to see him again. We didn't want to see him dead. Looking online, at least half the audience (if not more) were extremely unhappy with the ending. My personal observation is that this makes the lumberjack thing look like a genius move. I wish Harrison had stayed away.
Some online responses: 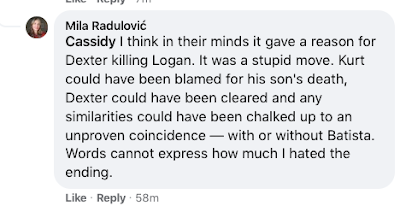 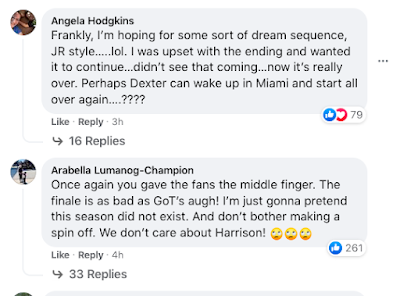 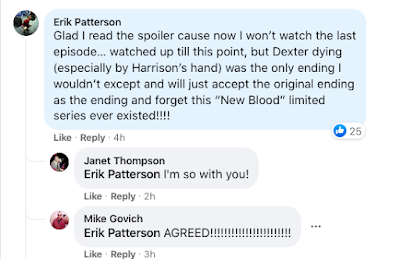 That the season's Big Bad (Clancy Brown's Kurt Caldwell) was killed off in the penultimate episode rather than the finale should have tipped me off that something bad was going to happen. Having watched this season, I wish they wouldn't have had Harrison and all the accompanying teen angst at all, but instead pitted Dexter against Caldwell. It would have been classic Dexter - two longtime serial killers who have managed to evade discovery for decades thanks to the facades they present to the world, facing off after one kills the other's son. I would like to have seen more about why Caldwell kills (other than having a fucked up dad), how he got away with it for so long, and more of a cat-and-mouse game between him and Dexter.
2: Harrison and Angela. I liked Angela (and the actress who played her) a lot at first and was intrigued when Harrison showed up. But as the show went on I found them less and less appealing and interesting. Harrison was often annoying and apparently went from constant rage and a desire to hurt people to just wanting a normal life in just a couple days. And Angela went from being by the book (wanting to nail Dexter for his Miami crimes) to sending Harrison on his way after he's just killed his own father, and not in self-defense, either.
Plus, how does this really help the kid?  Before he found Dexter, he'd been wandering the country on his own and now he has the same issues as before, plus patricide. Caldwell was right when he gave Harrison the advice that no matter how far he ran, he couldn't outrun his rage. Additionally, Harrison was enrolled in school and known in Iron Lake - he's going to be a missing person, which means law enforcement will be looking for him. It's not like no one is going to notice or care that he vanished after his dad was killed. Now instead of wandering and looking for his father, he's on the run.
Then there was the aspect that Angela's case against Dexter for killing Matt Caldwell was flimsy at best, something even he was able to explain to her while under duress and Logan basically agreed with. Someone torched his cabin - couldn't that same person have planted that screw? Infrared film of someone who might be him? She might be able to legally drag him through the mud for that one, but ultimately it would have probably been a repeat of her case for Kurt killing Iris - too much opportunity for reasonable doubt.
One thing that bothered me from the beginning was Angela's wall of missing women. That many missing persons from the environs of her small town for so many years...I don't see how these obviously related cases don't seem to concern anyone but her. She really had no leads during all the time these crimes have been going on? Never discovered Caldwell's secret cabin of horrors despite being a local? Never made a connection between so many girls missing from the area of Caldwell's truck stop? And yet she's on the verge of solving a crime that the size and might of Miami PD couldn't? One of the funniest things I read last night was someone referring to her as "Detective Google", because with just a few Google searches she managed to solve the Bay Harbor Butcher case.
And I think that's a legit point of view. She had no access to any case file, just stuff she found on the internet. I think that story line would have worked better if it had been stretched over a couple of seasons, with her slowly but surely (and more realistically) putting the clues together. It was a little too effortless and she was awfully quick going from pulling Dexter over to make out while on duty to being willing to suspect him of heinous crimes. It was a story line that could have worked, but didn't. If they could have stretched it out, maybe have her work secretly with Angel Bautista to build a case without Dexter knowing she was in touch with someone from his past might have worked better.
Speaking of Bautista, another peeve along that story line is that while it was a blast to see him show up so unexpectedly, the idea that he couldn't remember Harrison's name right away was so cringe - what, he's never thought about the kid in all the years Deb died and Dexter was presumed dead? Really weak.
3: Some people seem to think that a second season of New Blood would focus on Harrison, with Dexter as his Dark Passenger. As a Dexter fan from the very beginning, I have zero interest in that show and would not bother watching. Just no. Maybe Showtime is looking for the next generation of Dexter fans by making a teenager the new lead, but for longtime fans the appeal was always Dexter himself.
For me personally, in addition to how disappointed I was with this resolution, I also realized this morning that I now have no desire to go back and re-watch the New Blood episodes, knowing where they're heading. I figured I would go back and watch it from the beginning to see how everything fit together, but now I don't think so.
I close with this, because I thought it was hilarious. It's from this Deadline article.