Recent reading: "The Big Goodbye: Chinatown and the Last Years of Hollywood" 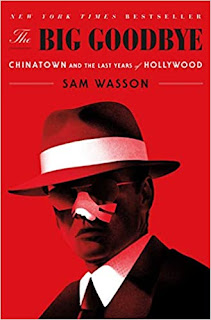 The Big Goodbye: Chinatown and the Last Years of Hollywood by Sam Wasson

The Big Goodbye looks at the struggle to create the classic film Chinatown by focusing on the four men responsible for bringing it to the big screen: screenwriter Robert Towne, producer Robert Evans, director Roman Polanski, and star Jack Nicholson.

The Hollywood that this quartet had fallen in love with and thrived in was coming to an end. One year to the day after Chinatown's release, Jaws hit the theaters and not only did Hollywood change the way they viewed successful films, but also how to make and market these films. Marketing departments and the Don Simpsons of the world were about to take over, replacing film-loving movie makers and the studios that had supported them with high-concept, often-lowbrow movies and summer blockbusters.

After the triumph of Chinatown, Evans became a dinosaur, infamously dethroned at Paramount. Towne started using cocaine and went off the rails personally, and Polanski was infamously convicted of raping a thirteen year old girl and skipped town for exile in Europe. Nicholson would confirm his status as a great star with his next film One Flew Over the Cuckoo's Nest, which earned him his first Oscar win (on his fifth nomination, the fourth being for Chinatown) and never looked back.

Wasson begins at the beginning, introducing the quartet by going back to their childhoods and giving the reader a look into what drove them personally and professionally. And of course, there is the inescapable and horrific story of the Manson murders, in which Polanski's wife Sharon Tate, their unborn son, and several others were brutally slaughtered, and its aftermath.

A terrific book, especially if you're a fan of Hollywood and film history as I am.

The phone rang in the cutting room, and Lambro picked it up.

It was a girl's voice.

"You have the wrong extension," Lambro told her. "There's no Paul here."

"That's for me," Polanski said, reaching for the phone.

Note: Lambro is composer Phillip Lambro, who wrote the first score for Chinatown that was eventually jettisoned in favor of the Jerry Goldsmith score used in the final cut. Paul was the name Polanski and Tate intended to give to their unborn son.
Posted by Melinda at 5:30 PM
Labels: Books, Crime, Film, Historic Hollywood, Historic Los Angeles, Screenwriting, Writers, Writing