A welcome sense of normalcy

Yes, I live in The People's Republic of Commiefornia, but even we are beginning to see a return to normalcy. Sort of. Finally.
The past week or so I have not worn a mask into grocery stores or at the car wash, and it hasn't been a problem. Some customers are still wearing masks, while others are not. Most employees seem to still be wearing them, probably required by their employers just to err on the side of caution.
In the past week, I registered for two in-person 2023 writer's conferences and gotta say, it felt kind of weird (but a good weird) to be looking at hotel info, indicating what kind of meal I'd like at the banquet, offering to serve as a volunteer and requesting to be put on panels, all in person. It was delightfully normal. On the other hand, I should be at Left Coast Crime in Albuquerque as I type this. I was signed up since it was originally scheduled in 2021, but in December they sent us an email stating that vaccinations would be required to attend, so that ruled me out. I can understand that four months ago they weren't sure how things would be going at this point, but fingers crossed that next year this won't be an issue.
Also, today I submitted a story for the first time in over a year. I have been writing and publishing, but the writing has been ongoing works in progress and the published stories have been out there for a while. The one that was accepted in March was submitted over a year prior. I did "win" NaNoWriMo in November, but even that project is in first draft condition, not anywhere near ready to go out into the world, so getting something out, even a flash fiction story, still felt good.
I like the feeling of not being on hold anymore, even as our political and media overlords seem to be tentatively floating the idea of yet another deadly strain of COVID. But I think people are sick of it, sick of having their lives and livelihoods put on indefinite hold by the powers that be despite the fact that COVID did not turn out to be the black plague we were promised. People are not dropping dead in the streets, populations are not being wiped out. There are numerous deadly diseases and medical issues out there, many of which are contagious and most of which have been around for years, and we never shut down our entire society for any of them, at least not in my not lengthy lifetime. Not sure what ultimately was the point of shutting it all down for this one, but I look forward to books that will no doubt be published on the subject in coming years. Yeah, I'm a little skeptical.
Fortunately, one constant that can be relied on to make life better is Sophie being ridiculously cute. Enjoy! 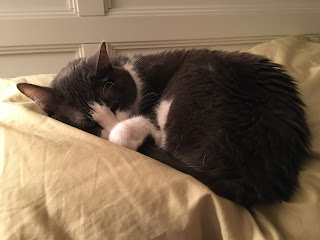 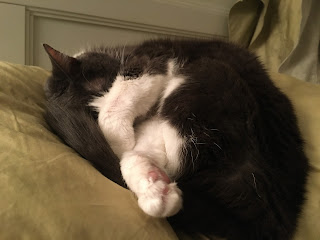 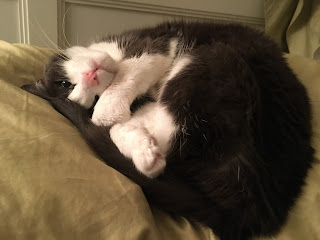