Recent reading: "The Not So Subtle Art of Being a Fat Girl: Loving the Skin You're In"

This is a book I would not have chosen on my own, but needed to read for a paper I wrote for a class that just wrapped up. My topic was the long-term damage and disservice being done to morbidly obese young women by the short-term feel-good benefits of the emergence of the recent fat acceptance movement.
I'm not talking about husky girls or size 16s. I'm talking about people who are not just 100 pounds overweight (the generally accepted definition of morbid obesity) but women who are way, way over that. Think Chrissy Metz (who has been as high as 400 pounds), Lizzo (300 pounds), and model/activist Tess Holliday (reportedly 280 pounds), whose autobiography I ended up using as a source for the paper.
My reason for choosing this topic is because I do think it's a disservice, and a dangerous, potentially deadly one. It's also a personal thing, because while I'm overweight, I've never hit morbidly obese territory. Still, I know what kind of issues I have and how uncomfortable I am at my weight, so when I see women who are 50, 100, 150, even as much as 200 pounds heavier than me, I just don't buy that they're living their best life and that they're comfortable in that skin. My opinion. Time will tell what the future holds for this movement. 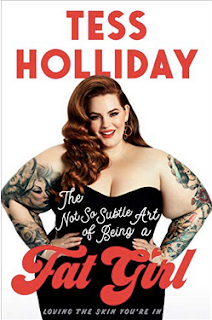 The Not So Subtle Art of Being a Fat Girl: Loving the Skin You're In
by Tess Holliday
In her defense Holliday had a difficult and chaotic childhood that would explain comfort eating, which she freely admits to. Growing up she dealt with poverty, divorce, and her mother nearly dying after being shot in the head. In her teens Holliday would experience taunting and criticism of her weight. She writes, "From a young age my life was simply about surviving."
Still, she's tough as nails. She originally wanted to be a makeup artist, but the discovery of plus-size models in a catalog helped inspire her to embark on a modeling career of her own. Social media helped bring her attention, leading to her #effyourbeautystandards hashtag going viral. In 2015 she became the largest model signed by a major agency, despite being much shorter and much heavier than typical plus-size models, who were usually tall size 16s.
Like many in-you-face activists, Holliday doesn't brook any criticism and this leads to a certain amount of hypocrisy. She criticizes people who utilize tanning salons because of - get this - the potential danger. She states, "I don't know why anyone would want to risk dying from cancer for the sake of getting a tan." And yet she doesn't address the risks of morbid obesity, of which there are a multitude. She also dismisses critics as compensating for their own issues and shortcomings, instead of at least acknowledging that they may have a point about the well-documented health risks of obesity.
Another thing I discovered in my research is the contentious issue of weight loss within the fat acceptance community. Holliday once unfollowed a fan who had documented her weight loss on Instagram. When the disappointed young woman contacted her to ask why, Holliday's response was, "Your weight loss posts are too triggering for me, I'm sure you understand." So much for acceptance, tolerance, diversity, and "healthy at any weight." And this despite the fact that the woman had lost weight on doctor's orders after having been diagnosed as pre-diabetic. More recently, Holliday, who does not appear to have lost a significant amount of weight (or any, really) has announced that she has anorexia, and I just don't know what to think about that. I do think it's safe to say that she has an unhealthy relationship with food (and I can sympathize with that) and probably some other issues that aren't being assuaged by her outwardly positive approach to her size.
In fact, not once does she mention her actual weight. She does admit to going from size 16/18 to 20 after the birth of her first child, and news coverage of her agency signing described her as a size 22. I know what size I wear even though I'm significantly smaller than her, so I'm taking that 22 with a big, fat grain of salt.
Overall, Holliday's is a great story of perseverance in the face of hardship, but it's also noteworthy for her refusal to discuss the possible long-term ramifications to not only her health, but to other morbidly obese women who might be encouraged by her story to embrace an unhealhty lifestyle, rather than really loving themselves enough to do a better job of self-care.
The wit and wisdom of Tess Holliday:
A photo of a fat person enjoying their life is no more "promoting obesity" than a photo of Stevie Wonder is "promoting blindness."
Yeah, I know.
Posted by Melinda at 1:32 PM
Labels: Books, Health & Well-Being, Instagram