Recent reading: The Reporter Who Knew Too Much

Another book, along with the Felder autiobiography from earlier this month, that I had partially read before setting it aside not because it wasn't any good, but because I got distracted by other shiny new toys/books. There's at least a couple more that fit into this category lying around, and now that I'm done with my spring classes and don't have a summer class, I'm hoping to get those wrapped up soon. 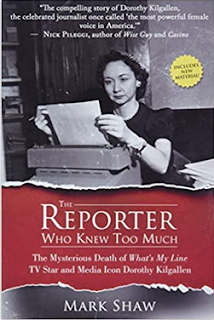 The Reporter Who Knew Too Much:
The Mysterious Death of What's My Line TV Star and Media Icon Dorothy Kilgallen
by Mark Shaw
Dorothy Kilgallen was one of the most famous and influential journalists of her day, but today is tragically largely forgotten. But before her untimely death in 1965, Kilgallen wielded immense power. She had a successful newspaper column and was seen weekly on television as a panelist on What's My Line. She was a top investigative journalist and covered a number of high profile cases, including the Sam Sheppard trial. Ernest Hemingway called her "one of the greatest women writers in the world" and the New York Post described her as "the most powerful female voice in America".
Kilgallen was a natural. She dropped out of college, went to work at the newspaper that also employed her father, and never looked back. At the height of her power she also made some dangerous enemies, including FBI director J. Edgar Hoover, Frank Sinatra, and according to this book, mobsters who eventually had her killed.
Kilgallen died November 8, 1965 at the age of 52 due to a deadly mixture of alcohol and barbiturates. What was never determined was how and why this lethal combination was ingested. The coroner left it at "circumstances undetermined", but Shaw argues that Kilgallen was murdered due to the investigation she was conducting into the assassination of President John Kennedy, which she unfortunately had been very vocal about. Kilgallen had become suspicious beginning with Jack Ruby's easy access to Lee Harvey Oswald and had supposedly linked both Ruby and Oswald to a New Orleans mob boss. She didn't buy the idea that Oswald acted alone and may have been about to publicly expose JFK's assassination as a mob hit, revenge not on the president but on his brother Robert Kennedy, the attorney general. One significant aspect of Kilgallen's death is that her Kennedy assassination file disappeared at the same time and was never seen again.
According to Shaw, the hit actually traces back to family patriarch Joseph Kennedy Sr., who enlisted the mob through Sam Giancana to help deliver votes in key states during the 1960 election. In return for helping deliver the presidency, it was expected that Bobby's relentless pursuit of organized crime figures (including the NOLA Don, who he'd had deported at one point) would go away. When it didn't, the mob felt used and betrayed, and that meant payback. Kilgallen not only apparently made this connection, but had attended Jack Ruby's trial, interviewed Ruby during the trial, and felt that his mob-approved lawyer, Melvin Belli, punted his defense. She also disputed the findings of the Warren Commission identifying Oswald as having acted alone in the assassination. Shaw posits that if Kilgallen had been able to complete her investigation and reveal her findings to the world, she could have changed history.
Shaw looks at a number of suspects with motives to silence Kilgallen before settling on the mob. It's a compelling case because of the widespread damage that could have been done to a number of individuals - including Hoover - had her findings been made public. Kilgallen herself had told friends that her life was in danger. Shaw also maintains that incompetence by the coroner who conducted the autopsy and an insufficient police investigation into her death led to her being dismissed as a boozer and pill popper who brought about her own demise, while denying her justice by not holding those responsible for her death accountable for murdering her.
If I have one quibble about the book it's that there are numerous occasions of typos, dropped words, and missing punctuation that begs the question of editing. It's a shame because it could be interpreted as amateurish and take away from this compelling and exhaustively researched argument about Kilgallen's death. There is also a corresponding website for the book and he's also written a second book on Kilgallen that I haven't read yet. Shaw had become interested in Kilgallen's story while researching a biography of Belli and discovering that after she died, Belli had told a friend, "They've killed Dorothy; now they'll go after Ruby."
The case is closed, is it? Well, I'd like to know how, in a big, smart town like Dallas, a man like Jack Ruby - owner of a strip tease honky-tonk - can stroll in and out of police headquarters as if it was at a health club at a time when a small army of law enforcers is keeping a "tight security guard" on Oswald. Security! What a word for it. (From one of Kilgallen's columns)
Posted by Melinda at 6:08 PM
Labels: Books, Crime, Dallas, Media, State of the Union, Television, Writers