Another great one gone.
Just saw the news that actor James Caan passed away last night. He was best known for his roles in Brian's Song, Misery, and of course, The Godfather. He also starred in Wes Anderson's debut film Bottle Rocket. The cause of death wasn't announced, but given that he was 82 and had several films in various stages of production makes me think he may not have been ill but probably died unexpectedly in his sleep, just like my Mom.
When I was in high school they actually had us watch Brian's Song, in which Caan played Brian Piccolo, a real-life Chicago Bears player who died of cancer at age 26. I'm don't remember why they showed it to us, but it had been a huge success on TV and I remember it was a major tear-jerker, leaving a number of us sobbing by the end. Caan was nominated for an Emmy for his performance.
Caan famously played hot-headed Sonny Corleone in the classic The Godfather. He was Oscar-nominated for that one and the scene where Sonny meets his maker became an iconic moment in film. In the film adaptation of Stephen King's novel Misery, Caan played injured author Paul Sheldon, tormented by nurse/super-fan Annie Wilkes (Kathy Bates) who is - to put it mildly - badly upset when she discovers he is killing off her favorite character.
Caan also appeared in Wes Anderson's quirky debut Bottle Rocket, as Mr. Henry, idolized by Owen Wilson's hapless wanna-be master criminal Dignan, who wants to follow in Mr. Henry's actual criminal mastermind footsteps. I can't imagine what it must have been like for fledgling filmmakers Anderson and Wilson to have an actor of Caan's stature on their project.
RIP, sir. 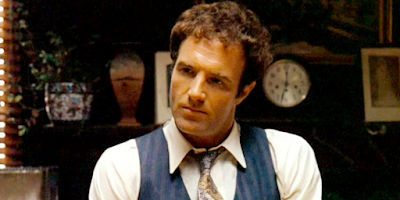 Posted by Melinda at 12:00 PM
Labels: Film, Historic Hollywood, In the News, Television