Vin Scully, long-time voice of the Los Angeles Dodgers, died yesterday at the age of 94. It was a life well-lived, but also a tough loss for Los Angeles, where Scully was a legend and part of the soundtrack of so many Angeleno childhoods and lives, including mine. It's been years since I've watched a Dodgers game, but I can still hear Scully's voice in my head announcing, "It's time for Dodger baseball!"
Part of Scully's appeal was that in addition to being one of the very best at what he did, he was also a class act. I have literally never heard a negative word about him. A devout Catholic, he credited his faith and his work in surviving the premature deaths of his first wife and his eldest son. His second wife, to whom he was married for 48 years, passed away last year. 94 years is a good, long life, but the world is a poorer place without Vin in it.
This article on mlb.com has some great vids of some of Scully's many finest moments in the broadcast booth. 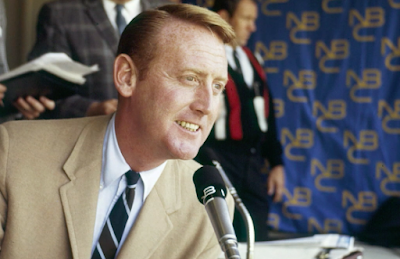 "You and I have been friends for a long time, but I know in my heart that I've always needed you more than you've ever needed me, and I'll miss our time together more than I can say. But you know what? There will be a new day and eventually a new year. And when the upcoming winter gives way to spring, rest assured, once again it will be "time for Dodger baseball." So this is Vin Scully wishing you a very pleasant good afternoon, wherever you may be." (Vin Scully's signoff after his final game.)
Posted by Melinda at 3:50 PM
Labels: Faith, Historic Los Angeles, In the News, Los Angeles, Los Angeles Dodgers, Radio, Television