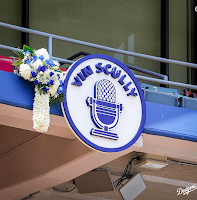 I try to call the play as quickly as I possibly can and then shut up and let the crowd roar because, to me, the crowd is the most wonderful thing in the whole world when it's making noise. --Vin Scully
I have a deeply hidden and inarticulate desire for something beyond the daily life. --Virginia Woolf
Character may almost be called the most effective means of persuasion. --Aristotle
A good character is the only guarantee of everlasting, carefree happiness. --Seneca
If you want to be beautiful, make beautiful choices. --Epictetus
Your calm mind is the ultimate weapon against your challenges. --Bryant McGill
I live in that solitude which is painful in youth, but delicious in the years of maturity. --Albert Einstein
Most people fail, not because of lack of desire, but because of lack of commitment. --Vince Lombardi
Many may mock you for following the old ways, but if they are not going on the same journey, their words are meaningless. --Ryan Landry
I don't want to suffer, so excuse me if I excuse myself from situations that suck all of my energy. --Sylvester McNutt
Sometimes it takes courage just to stay alive in this world. --Seneca
Let the lie come into the world, let it even triumph. But not through me. --Aleksandr Solzhenitsyn
The uncontested absurdities of today are the accepted slogans of tomorrow. --Ayn Rand
We don't have inflation because we are living too well. We have it because the government is living too well. --President Ronald Reagan
First you take people's money away quietly and then you give some of it back flamboyantly. --Thomas Sowell
When a clown moves into a palace he does not become a King. The palace becomes a circus. --Turkish proverb
Liberty is meaningless where the right to utter one's thoughts and opinions has ceased to exist. --Frederick Douglas
If you want to change the world, change education. --Nelson Mandela
Truth is a force of nature. --President Donald Trump
I like to be a free spirit. Some don't like that, but that's the way I am. --Diana, Princess of Wales
Image from the Los Angeles Dodgers on Facebook
Posted by Melinda at 7:00 AM
Labels: Los Angeles, Los Angeles Dodgers, Personal Drama, State of the Union, Words of Wisdom, Writers, Writing