Recent reading: "The Murder of Roger Ackroyd" and "Murder on the Orient Express"

Well, this is gonna kill off some time I should be spending on other things. I've recently discovered YouTube accounts that not only have all the Poirot episodes from the very beginning, but also channels that have audiobooks of Agatha Christie's novels, including Poirot books read by David Suchet and Hugh Fraser. If those names don't mean anything to you then you've missed out on one of the best TV shows ever. (Suchet plays Hercule Poirot, while Fraser was Captain Hastings, Poirot's Dr. Watson in the BBC series). These were the first two I've listened to. 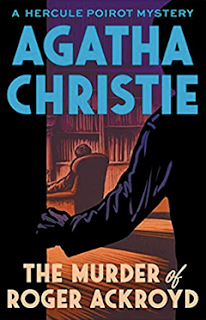 The Murder of Roger Ackroyd by Agatha Christie
Read by Hugh Fraser
Renowned for its twist ending and unreliable narrator, The Murder of Roger Ackroyd is one of Christie's best. The British Crime Writers' Association voted it the best crime novel of all time. Unfortunately, a lot of the story was changed when they filmed this one for the BBC series, so if you've seen it you still need to read the book.
Hercule Poirot has retired to the small town of King's Abbot with no greater goal than to mind his own business and tend to his vegetable garden. But of course he's caught up when one of King's Abbot's most prominent citizens is found murdered, while his new neighbor, Dr. James Sheppard, tags along while helpfully providing Poirot with background on the locals and their back stories.
One of the things I loved about the story was Poirot admitting that he missed his sidekick Hastings, who has moved on to Argentina. His treatment of Hastings over the years didn't always reflect this kind of affection. It is this void in his life and investigation that Dr. Sheppard fills, giving him a front-row seat to Poirot's methods.
Also, one of the things that made listening to this so enjoyable, in addition to hearing Fraser's beloved voice, was his spot-on imitation of Suchet's Poirot. Murder on the Orient Express by Agatha Christie
Read by David Suchet
Another Christie story famous for its non-traditional ending, Murder on the Orient Express finds Poirot in a locked room mystery aboard a passenger train while traveling home to England from the Middle East. The Orient Express becomes snowbound during the night and the following morning one of the passengers is discovered stabbed to death in his cabin. With the train and its passengers stuck, Poirot examines the evidence piece by piece and questions the passengers one by one, until coming to a fantastical - but accurate - conclusion.
Next up: Dumb Witness read by Hugh Fraser. Why? Because it was the first Poirot I ever watched, and just like that I was hooked.
Posted by Melinda at 3:58 PM
Labels: Books, Cool Stuff, Crime, I Customer, Television, Writers